The 2017 Laid Back Festival: In The Spirit of Gregg Allman at The Northwell Health at Jones Beach Theater 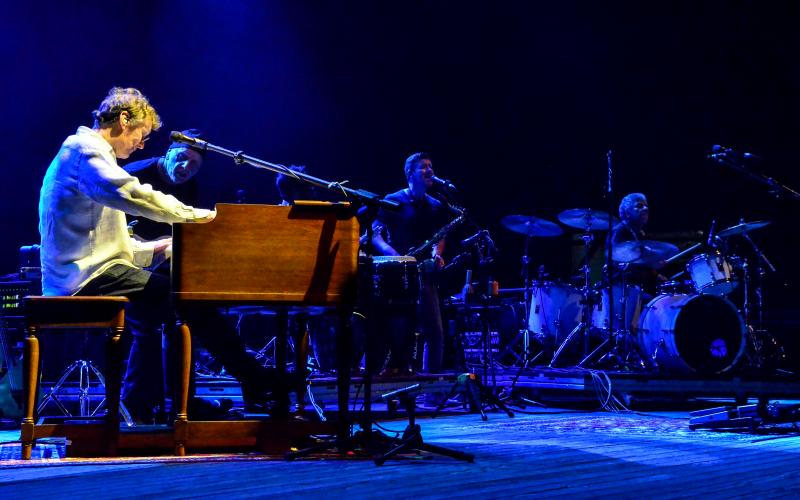 By MIKE PERCIACCANTE
October 14, 2017
Sign in to view read count
The 2017 Laid Back Festival: In The Spirit of Gregg Allman
The Northwell Health at Jones Beach Theater
Wantagh, NY
September 24, 2017

Gregg Allman co-founded and curated the inaugural Laid Back Festival. That festival began as a single day celebration in August of 2015 and was held at the Jones Beach Amphitheater in Wantagh, NY. Allman, The Doobie Brothers, Bruce Hornsby and the Noisemakers, Jaimoe's Jasssz Band and City of the Sun played that day. In 2016, Laid Back expanded to encompass one-day performances in five different cities. The 2016 festival at Jones Beach was highlighted by Allman, Jason Isbell, America, The Marshall Tucker Band, Jaimoe's Jasssz Band, Orleans, Devon Allman and Levon.

Gregg Allman passed away in late May 2017. The 2017 Laid Back Festival is being presented in the spirit of Allman with six dates (September 21 at the PNC Bank Arts Center in Holmdel, NJ; September 23 at the XFINITY Theatre in Hartford, CT; September 24 at the Northwell Health At Jones Beach Theater in Wantagh, NY; October 1 at the Red Rocks Amphitheatre in Morrison, CO; October 7 at the Pavilion at Toyota Music Factory in Irving, TX and October 14 at the Verizon Wireless Amphitheatre at Encore Park in Alpharetta, GA).

On September 24, at Jones Beach, as in the past, the talent was hearty and plentiful enough to span two stages: the Low Country Stage and the Laid Back Stage. The Low Country Stage was home to Jaimoe's Jasssz Band, Garland Jeffreys and Scott Sharrard & The Brickyard Band. The Laid Back Stage sported Peter Wolf, Steve Winwood and in the headlining slot, Jackson Browne.

In addition to the music, the event featured over 20 regional food trucks, breweries, wineries and restaurants. The venue's doors opened early providing the crowd members with more than enough time to make their way around and sample all the offerings. There were a number of large outdoor couches situated in close proximity to the Low Country Stage, toward the back of the standing area, where audience members could relax and be a tad more comfortable on this unseasonably sunny and hot late September afternoon.

As always the festival itself was sensational. In 2015 and 2016, Allman was able to create and curate a truly diverse and entertaining concert as well as a distinct food event featuring vendors from all over the area. This year's event was no different. Allman's spirit was felt throughout each of the performances. Concert goers were treated to southern- influenced rock, blues, jazz-infused Americana, old fashioned rock 'n' roll, Southern California breezy rock, pop and just about every other form of music. The assorted food vendors offered many different foods: BBQ, pizza, burgers, pulled pork, empanadas, pretzels, churros, Italian ices, ice cream and numerous wines, craft beers and sodas.

The event was well-organized and run in a first-rate fashion. In an effort to allow for a smooth flow, each band's set was staggered, so that the fans had an opportunity to see each performer.

Jaimoe's Jasssz Band was the first band to perform. Taking the Low Country Stage promptly at 4:45pm, the Allman Brothers drummer and his group (Junior Mack on guitar and vocals, Dave Stoltz on bass, Bruce Katz on keyboards, and Paul Lieberman on sax, Kris Jensen on sax and Reggie Pittman on trumpet) delivered a burning hot hour-long set of tunes that, as was expected, included a few Allman Brothers tunes.

The first set on the Laid Back Stage featured Peter Wolf delivering a baker's dozen of tunes that mixed his J. Geils Band hits with the best songs from of his solo his career. Opening with "Thick As Thieves" and "Homework," Wolf and his band immediately had the audience singing along and dancing in the aisles. The high energy set was highlighted by a stellar versions of "Lights Out," "Must of Got Lost," "Start All Over Again" and "Love Stinks."

Garland Jeffreys was the next act to play. Playing on the Low Country Stage, Jeffreys delivered a tight half-hour set that featured his patented gumbo of rock, soul, pop, blues and reggae. The stage area was packed with fans who were overheard wondering what he'd play. Many had their cellphones at the ready hoping to take video and document the performance. Jeffreys did not disappoint as he delivered stellar versions of "We The People," "When You Call My Name" (from his 2017 Luna Park Records release 14 Steps to Harlem), "Wild In the Streets," and "96 Tears."

ADVERTISEMENT
Next up on the main stage was Steve Winwood. Winwood has been delivering his tasty brew of rock, pop, blue-eyed soul, rhythm and blues, blues and jazz for over fifty years. His set was short on songs but long in length. Winwood somehow managed to fit songs that touched on virtually all aspects of his extensive catalog and career into his hour and fifteen minute slot. He visited his time with the Spencer Davis Group on "I'm A Man" and the set closer "Gimme Some Loving." His days in the supergroup Blind Faith were represented by "Can't Find My Way Home" and "Had To Cry Today." The Buddy Miles-penned "Them Changes," recorded by Winwood and Eric Clapton on 2009's Live from Madison Square Garden (Duck/Reprise Records), was an early show-stopper that received a raucous round of applause. Winwood visited his solo career with "Fly" from Nine Lives (Columbia Records, 2008) and "Higher Love" from Back in the High Life (Island Records, 1986). Stunning jamband performances of Traffic's "The Low Spark of High Heeled Boys," "Empty Pages" and the set-closing tour-de-force "Dear Mr. Fantasy" were the highlights of his amazing performance. At the end of his set, the audience who had spent the show singing along and bopping to the music rewarded the 69-year-old legend with a well-deserved standing ovation.

Scott Sharrard & The Brickyard Band were fittingly the last act of the evening on the Low Country Stage. From 2008 until Gregg Allman's passing, Sharrard was the lead guitarist and musical director of the Gregg Allman Band. His set began with him reminiscing about Allman, their relationship and how they had shared the big stage at the previous year's festival. Following his tribute, his set, which featured high-energy southern rock, bluesy rock and old-fashioned rock 'n' roll had the audience feeling the spirit of late icon.

As afternoon gave way to evening and the sun began to set, the crowd at the main stage began to get larger. With the fans filing into their seats, the level of anticipation was high. Jackson Browne would soon be delivering an hour-and-a-half set of his best loved songs.

Browne hit the stage and immediately got into gear with the strong combination of "The Barricades of Heaven," "You Love the Thunder" and "Fountain of Sorrow." The set proceeded with "The Long Way Around," "I'm Alive" from the album of the same name (Elektra Records, 1992) and "For Everyman."

Browne then took a moment to get serious. He stated that he was honored to have been asked by Allman to play at the festival. The version of "Melissa" that followed served as a touching and well-deserved eulogy to the late singer. Other highlights of the concert included "Doctor My Eyes," "These Days," a special request from an audience member—"Rock Me on the Water" and a spine-tingling version of "Take It Easy" (which, though known by most as an Eagles song, was actually written by Browne with some assistance from Glenn Frey and released by Browne on his 1973 Asylum Records albumFor Everyman).

Browne, who vowed to keep playing until festival's predetermined cut off time, was able to include only one more song. The last song of the evening was "Lady Of The Well." His legion of fans were thrilled and generally happy, though some were heard grumbling that they would have liked to have heard more classic such as "Lawyers In Love," "Before The Deluge," "Stay," "Rosie," "Boulevard" and "The Pretender."

The festival again was a complete success. A multi-generational and multi-cultural fanbase joined together to celebrate the life of Gregg Allman. The musicians delivered professional, sweet and wonderful sets and tributes. Although he has passed, Allman's soul and presence was felt throughout the festival grounds and in the performances.

Though the thermometer readings in the Long Island region were well into the 90s (an anomaly for late September), the temperatures at the Northwell Health at Jones Beach Theater were a tad lower and much more pleasant due to a friendly breeze off the water. The combination of good music, good food, cold refreshments and a lively, engaged audience made for a fantastic festival. Let's hope that the organizers continue to bring the festival back as a yearly event.