The 2016 Rock Hall Three for All: Heart, Cheap Trick and Joan Jett & the Blackhearts 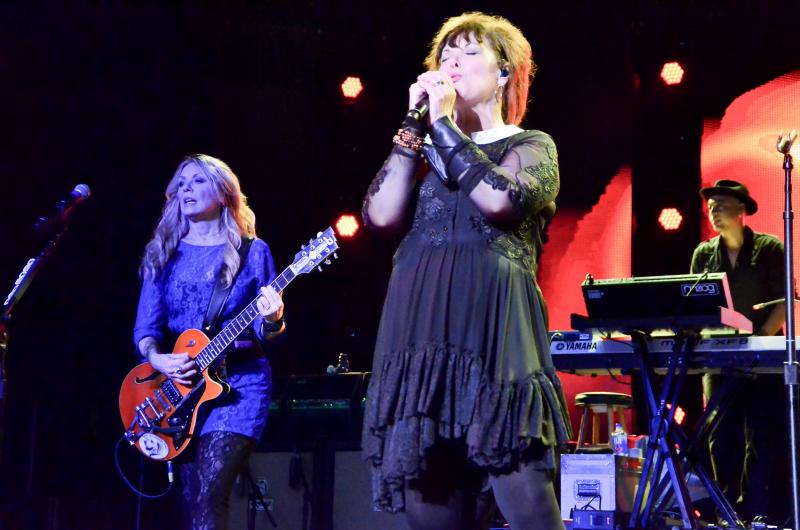 On July 28, 2016 all three of these acts came together at the Nikon at Jones Beach Theater for the appropriately named Rock Hall Three for All concert. The 31-day tour has been heating up across the U.S. while the summer of 2016 also heats up. During the earlier part of the tour Cheap Trick took the stage first, Joan Jett & the Blackhearts were up second and Heart lead by the Wilson sisters, Ann and Nancy closed out the show. On this extremely hot and humid late July evening, a slight change was made to the running order. Because Joan Jett lives in nearby Long Beach, NY, she was tapped to close the evening in front of her hometown fans. Sadly, this caused Heart to remove two encore songs that it had been performing on earlier dates in the tour—cover versions of Led Zeppelin's "Immigrant Song" and "Stairway To Heaven."

The evening's performance began with Cheap Trick's opening audio and video montage followed by what has become this classic quartet's usual, and by now expected, recorded introduction, a pleasant female voice stating, "Ladies and Gentlemen, Boys and Girls, please welcome to the stage, the best fucking rock 'n' roll band in the galaxy—Cheap Trick!" As always Cheap Trick didn't just take the stage, they stormed it much like an army does when it goes on the offensive. The opening numbers "Hello There," "Heart On The Line" and "California Man" were highlighted by the ferocious and intense music put forth by Rick Nielsen (guitar, Robin Zander (guitar and lead vocals), Tom Petersson (bass) and Daxx Nielsen, yes, he's Rick's son (drums).

Prior to playing "If You Want My Love" Nielsen, who was dressed in a shiny black sports jacket over a Cheap Trick t-shirt, announced," If you know the words sing along. If you don't, sing louder!" Cheap Trick's set, though short, featured almost every one of the band's signature tunes as well as some welcome surprises. "Never Had a Lot to Lose" was introduced as, "This one's for Heart. They requested it. They're not here yet to hear it, but..." Tom Petersson took over the lead vocals on the Velvet Underground's "I'm Waiting for the Man" which on this night also included a snippet of "Heroin." "Blood Red Lips" from the Bang, Zoom, Crazy...Hello CD (Big Machine Records, 2016) fit in nicely with the older songs in the band's set. No Cheap Trick show would be complete without the power ballad, "The Flame" which gives the audience a chance to rise to its feet and sing along with Zander. From the opening riff to the closing notes, the Jones Beach crowd did not disappoint—they sang along and slow danced as the song that has graced so many proms and weddings was delivered. The set closed with a four-pack of perfect and pure power-pop rock 'n' roll: wild and fierce versions of "I Want You To Want Me," "The Dream Police," "Surrender" and "Goodnight." The entire thirteen song performance was over in a flash. It's a shame that the audience wasn't able to see Cheap Trick play a full show because the band really is as good as they claim to be. On this night even with the abbreviated set, they were fantastic.

After a short intermission, Heart took the stage. Its main set was only ten songs long. However during those ten songs, sisters Ann (lead vocals and acoustic guitar) and Nancy Wilson (vocals, rhythm guitar and mandolin) along with their band (Ben Smith on drums, Craig Bartock on lead guitar and Dan Rothchild on bass and Chris Joyner on keyboards) delivered classic hit after hit along with the new song "Beautiful Broken" (from the 2016 Concord Records CD of the same name). This is a band that plays in the same manner in 2016 as it did during the late '70s and in the '80s—like a well-oiled machine.

From rocker to ballad and back again ("Magic Man" to "Alone" to "Crazy On You") to everything in between ("What About Love," "These Dreams, the Neo cover "Two," a powerful version of "Straight On" (with an intro that included a snippet of James Brown's "Get Up Offa That Thing") and the classic rock staple "Kick It Out," Heart brought its version of kick- ass rock 'n' roll as well as soulful balladry to the Long Island crowd in a take no prisoners manner.

A muscular "Barracuda" brought the crowd to its feet and closed the main set. In very short order Heart returned with some surprise guests—Cheap Trick. With Zander sharing the vocals with Ann Wilson, Rick Nielsen on guitar, Petersson on bass and Daxx Nielsen on percussion joining the band, Heart and Cheap Trick brought down the house with a passionate and wonderful version of the Everly Brothers' "Love Hurts." Hometown crowd or not, Joan Jett was going to have a tough act to follow.

Now Joan Jett is definitely a legend and a trailblazer—after all she was a member of the Runaways and as a solo act she has had, with "I Love Rock 'n' Roll," a number 1 Billboard Hot 100 hit. She has also released a number of albums that have been certified gold and/or platinum by the RIAA. But on this hot evening, following her fellow Rock 'n' Roll Hall of Fame inductees, she had her work cut out for her.

Playing in front of a banner that read "Joan's Beach," Jett and the Blackhearts opened hot with "Bad Reputation," the Runaways' staple "Cherry Bomb" and "Do You Wanna Touch Me (Oh Yeah)." She also closed the main set strong with "I Love Rock 'n' Roll," "Crimson & Clover" and "I Hate Myself for Loving You." It was the middle eight (so to speak), actually ten, where she sagged. With the exception of "Light of Day" and perhaps "Love Is Pain" the middle of the set was a bit lagging and dragging. It is possible that Jett and the band had a bit of hometown jitters.

On the encores, the covers of Johnny O'Keefe & The Dee Jays' "Real Wild Child (Wild One), which most people identify as an Iggy Pop tune, and Sly & The Family Stone's "Everyday People," Jett and her Blackhearts really shined. They rocked. They rolled and they played as though their lived depended upon it.

On the whole, Jett & the Blackhearts' performance was good. It was just too long. From the less is more school of thought, had Jett and her band stuck to the first three songs, "Light Of Day," "Love Is Pain" a choice album track or two, and the last three tunes, along with the encores, it would have delivered a near perfect performance.

The package tour was and is a great idea—in this case three recent inductees into the Rock 'n' Roll Hall of Fame all of whom still perform at the level that got them enshrined. These three bands are what rock 'n' roll is all about. They play real instruments; they play their own instruments and their vocals are "real" not enhanced. Let's hope that they continue to do what they've been doing for all these years—play amazing rock "n' roll.