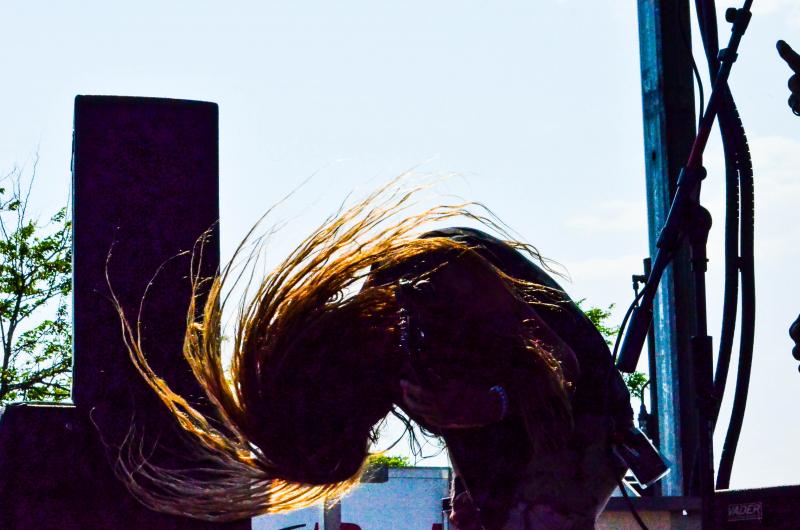 In a world of full of corporate branding and everything under the sun being sponsored, there are some partnerships that truly make sense. Vans backing the Warped Tour, which started as a skate punk rock festival, is a perfect example. Another is the fusion of Rockstar Energy Drinks and Mayhem Festival. In its eighth year, this North American metal rock tour is perfectly fueled and supported by the well-known energy drink, complete with a huge tented area that gives thirsty concert goers the chance to refuel with a can of their tasty liquid power.

The festival, a veritable feast of all genres metal, including death, groove, nu, deathcore, power, industrial, progressive and metal core, began in the parking lot. On a hot, summer Saturday, the tour rolled in to Nikon at Jones Beach Theater in Wantagh. With doors opening at 1:00pm under a blazing sun and staggered stage times, many fans opted to pull out coolers, grills and beach chairs, popping open hatch backs and turning car stereos up, a party atmosphere starting early.

Two stages promised action on this day, with the smaller, more intimate Victory Records Stage bringing acts that may not have hit fans' radar. Kicking off at 1:20pm and boasting sets that ran between 15 minutes and 40 minutes in length, this stage was set apart, a winding walk through the venue's courtyard lined with concession and merchandise stands. Down a path and in a portion of the grounds usually inaccessible at Nikon at Jones Beach Theater, a few twists and turns away spread out lots of vendor tents, the Rockstar Energy Drink lounge, the Victory Records Stage and an enormous area in the center for fans to gather.

A true festival vibe, fans mingled about, wearing the prescribed uniform of black shirts branded with their favorite metal act emblazoned on the back. A father stretched out a picnic blanket under a stationary trailer with two kids wearing huge headphones to protect from the cacophony of sounds emanating from the nearby stage. With anticipation for the evening's main stage entertainment, the ample crowd surrounding the Victory Records Stage was treated to Feed Her to the Sharks, Kissing Candice, WhiteChapel, Thy Art is Murder, Jungle Rot, Sister Sin, Sworn In, Shattered Sun and Code Orange. With sound that carried back to the main concourse as well as out to the parking lot, fans wandered, shopping, eating or waiting in the shade for the main stage to open.

The annual tour that crosses the U.S.—normally with a single date in Canada—was assembled by Vans Warped Tour founder Kevin Lyman and John Reese, and has always been sponsored by Rockstar. Although there has been a third stage in past years, this year brought only two. But, as in past incarnations, the opportunity for meets and greets was alive and well and utilized by the fans. Fans who attended Mayhem in the past have witnessed the likes of groups like Slipknot, Mastodon, Five Finger Death Punch, Marilyn Manson, Bullet for My Valentine, Korn, Rob Zombie, Lamb of God, Disturbed, Godsmack, Megadeth, Motorhead, Asking Alexandria and more.

This year, the Rockstar Energy Drink Main Stage kicked off the action shortly after 6:00pm with Devil Wears Prada playing the shortest set: 35 minutes of metal including "Escape" and "Assistant to the Regional Manager" appearing early in its eight-song set list. Hailing from Dayton, Ohio, front man Mike Hranica led a raucous set, never standing still for more than a moment. Next up, Hell Yeah delivered a 45-minute set, lead singer Chad Gray rocking out with fake blood over his entire face as he brought crowd favorites like "Sangre por Sangre" and "War in Me" to the screaming fans below. The general admission standing area in front of the stage started to really fill up as the sun began to set and the headliners to come began to loom large.

King Diamond took the stage next. With an even more theatrical set the Danish vocalist, known for his incredible vocal range and falsetto, brought his painted face and elaborate stage set to the fans. As vocalist for both King Diamond and Mercyful Fate, the artist born Kim Bendix Petersen has a following and they indeed showed up. The hour-long set did not disappoint, including crowd favorites like "Evil," "The Candle," and "The 7th Day of July, 1777."

When Slayer took the stage at 9:45pm, the fans were pumped and ready. The iconic thrash metal band from Huntington Park, CA absolutely brought it, rocking out the longest set of the day, a hearty 75-minute tour through its plentiful batch of hits. Under red lights, an enormous video monitor and billowing smoke machines, lasers danced and the crowd in front of the stage shouted, moshed and threw devil horn rock hands into the air wildly in time with the thrumming bass and drum lines. "Repentless" opened the set, a choice enthusiastically favored by the masses, based on the reception below. "Hate Worldwide," "Jihad," "Disciple," and "Raining Blood" all had places in the set list. All business, Slayer took the headline position to heart, giving fans exactly what they came for. As the set wrapped up at 11:00pm, fans stumbled from the arena, sweaty, happy and excitedly looking forward to Mayhem 2015.