By GLENN ASTARITA
April 5, 2015
Sign in to view read count 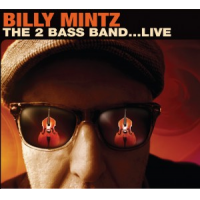 Venerable first-call session artist and bandleader, Billy Mintz (Alan Broadbent Trio, Eddie Daniels Quartet) has logged years of productive time within the East and West Coast USA jazz communities. Calling New York home since 2001, he formed the 2 Bass Band, which is a unit that performs at many of the well-known Manhattan venues, but surprisingly, has never recorded an album until now. And it's probably fitting that the large ensemble—anchored by bassists Masa Kamaguchi and Cameron Brown —is captured live, namely at Brooklyn's popular Ibeam music club.

The dual bassists inaugurate the presentation by stirring the pot for a few minutes on "Beautiful You," segueing to a program ingrained with swirling horns, layered developments and brashly enunciated choruses. Yet the majority of these works are sketched on memorable themes, partly evidenced by the rolling bass and drums led tribal ostinato motif on "Ghost Sanctuary," crystallized by a soft horns arrangement and weaving improvisational dialogues.

Mintz occasionally launches a piece via poetically concocted, polyrhythmic solos. Otherwise, the ensemble alternates its modus operandi between old school charm and blazing progressive jazz outpourings. As "Flight" is a comp designed with a perky mid-tempo motif, dappled with amber horns phrasings and Kenny Berger's light-as-a-feather clarinet lines. But they turn the tide on the following piece "Shmear," engineered with brash, little big band pronouncements and impromptu head charts, spanning free-bop and a stately hook. Here, saxophonist John O'Gallagher raises the bar with his scorching solo spot. As the musicians skirt the free zone again, amped by Mintz' sweeping and buoyant support on the album closer "Relent, featuring fiery solos by Berger and saxophonist Adam Kolker. Taken as a whole, it's a democratic engagement, abetted by the leader's strong compositional pen and enlivening arrangements. Simply stated, there's a whole lot of goodness taking place on this long overdue release.