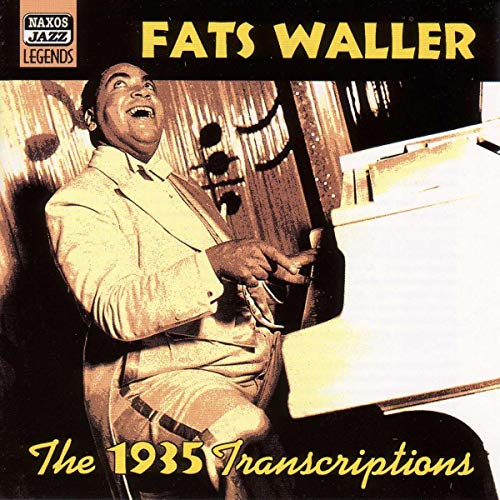 Born in Waverley, New York in 1904, raised in Harlem, and schooled by his mother, James P. Johnson, Karl Bohm, and Leopold Godowsky, Thomas "Fats" Waller would have been a giant in American music history without his happy gargantuan personality. A personality, in fact, so big, that his showmanship has often overshadowed his considerable pianistic talent and technique. I admit, it is hard to watch Stormy Weather and see Waller mugging and singing "Ain't Misbehavin'" and take him as seriously as one would take, say Mozart or Clementi. But, that would be our 21st century folly.

In perfect truth, Waller is of central importance, indeed to the New York stride tradition. Predating Art Tatum, it was Waller who, from the bandstand, referred to Tatum as God when Tatum entered a club where Waller was playing. If Tatum is God, I suspect that Waller if John the Baptist. Yes, I think that is right. Waller contributed some of the most durable standard to the Jazz Canon. "Ain't Misbehavin'," "Blue Turning Grey Over You," "Smashing Thirds," "Handful of Keys," and "Honeysuckle Rose" beam with his Waller's good nature and enormous talent.

The current Naxos Jazz Legends release details the entire March 1935 program of medleys from the CBS radio "Rhythm Club" broadcasts. This music was originally captured on 16-inch transcription discs. The entire disc reminds me of a Robert Plant-Jimmy Page concert I witnessed in 1997. In that show, the working half of Led Zeppelin guided the audience down memory lane with medleys and snippets of Zep songs, all ingeniously combined, shot out of a machine gun. In that show the music lacked substance, in spite of the principles performing. Waller avoids this with the sheer force of his talent. He presents his material in clever combinations at a gattling gun pace. It is almost overwhelming. When it is over, the listener can't help but say, "Wow!"

These sides are well suited for the uninitiated in Fats Waller. The disc amply displays his keyboard and singing prowess. Waller's supreme good nature is abundant. A great starting place at a great price.