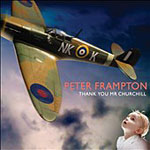 Thank You Mr Churchill is Peter Frampton's latest attempt to reconcile fame with artistic integrity, a campaign he's been waging much of his career. Looking to escape his teen idol status in The Herd by partnering with Steve Marriott in the quasi-super group Humble Pie, he departed their ranks when growing fame relied too heavily on hard rock, at the expense of his more reflective and subtle approach. His first solo album, Wind of Change (A&M, 1972), remains his most complete statement to date as the work just prior to and in the wake of the mega-stardom ignited by Frampton Comes Alive (A&M, 1976), which carried little weight.

Frampton has, nevertheless, soldiered on, refusing to allow his self-respect to disappear and finding some measure of redemption when his all instrumental album Fingerprints (Steamhammer, 2006), won a Grammy Award. On the overtly topical Thank You Mr. Churchill, keynoted by its title song, Frampton mixes some breezy melodies, a slightly overwrought vocal style, and a measure of heavy riffing that's similar to his previous work; openly stating what he could only suggest with his guitar on Fingerprints.

Yet it's in his musicianship that Frampton is at his most articulate, and that's undercut somewhat on a track like "Solution," where lumbering motion undercuts his commentary on media. All too-often, Frampton's solos and fills radiate a frenetic air; he long ago (and, equally, just recently) proved himself as a guitarist who might do himself a favor by relaxing a bit more often, as he does on the two-part "Suite Liberte," where he exercises admirable finesse in the transition from acoustic textures to pure blues.

"Road to the Sun," featuring offspring Julian, suggests all too strongly an unavoidable irony that echoes throughout this album. Frampton left a band some three decades ago rather than just grind out a hard rock to the lowest common denominator. Chris Kimsey returns to co-produce with Frampton and helps present the music clearly enough, but without the ingenuity of their earlier collaboration.

It's hard to distinguish the basic structure of "I Want It Back" from what became arena rock in the years following Frampton's ascent to commercial success. "I'm Due a You" has the hint of a less heavy-handed approach, as does "Vaudeville Nanna and The Banjolele," but the softer touches are drowned in an unnecessary and unproductive cacophony that sounds all too generic by the time of "Asleep at the Wheel." Unfortunately, too, neither Frampton or co-composer Gordon Kennedy bring new shades of meaning to the common phraseology of its title.

Ultimately, Thank You Mr Churchill finds Frampton trying too hard to establish contemporary credibility for himself that's proportionate to the celebrity of his past. It's a textbook case of the less said the better.

Thank You Mr Churchill; Solution; Road To The Sun; I'm Due A You; Vaudeville Nanna And The Banjolele; Asleep at the Wheel; Suite Liberte: Megumi/Huria Watu; Restraint; I Want It Back; Invisible Man; Black Ice.