By DOUG COLLETTE
February 9, 2013
Sign in to view read count 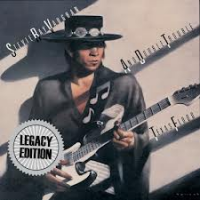 Guitarist Stevie Ray Vaughn's ascendancy into the mainstream in 1983 via his debut album launched more than a blues revival. The release of Texas Flood, now available in a 2CD edition, signaled a paradigm shift where coexisting demographics (such as the MTV ephemera of the time) fought for audiences.

As noted in the extremely informative, yet passionately composed liner notes by historian Ashley Kahn, Vaughan's first release with Double Trouble was a lightning rod for attention beyond just purists and aficionados of the blues idiom. The studio album consisted of economical takes of a well-practiced selections such as "Pride and Joy" that, despite their long-standing inclusion in the trio's repertoire, evinced a vigor rooted in the musicians' excitement to be recording their first album under the aegis of label luminary John Hammond (who had also signed Billie Holiday, Bob Dylan and Bruce Springsteen).

His curiosity piqued by a tape SRV had prepped in Jackson Browne's West Coast studio late in 1982, Hammond's enthusiasm led directly to vibrant renditions of originals, including the frenetic "Rude Mood," as well as the languorous instrumental companion piece, "Lenny." Neither instrumental appears on the live recording on disc two here, recorded in October, 1983 as Vaughan and Double Trouble toured in support of its record, but the bulk of the rest of the album is here, rendered with an even greater authenticity, arising from the charged atmosphere derived from a band making the most of every opportunity to playing in front of an audience.

The bold inclusion of Jimi Hendrix' "Voodoo Child (Slight Return)" (which includes a quick tease of the other guitar icon's "Power of Love") and the "Little Wing"/"Third Stone from the Sun" medley becomes as much of a legitimate nod to Vaughan and Double Trouble's roots as the cover of Buddy Guy's "Mary Had a Little Lamb." Ultra-smooth yet cutting when necessary, the Austin guitar wünderkind's touch on his instrument is as beautiful to behold as the dynamics he commands, the range of which is as broad as his choice of material.

The potent arrangements that Vaughan forged with bassist Tommy Shannon (who had previously played an extended stint with another Lone Star bluesman, Johnny Winter) and drummer Chris "Whipper" Layton include the opening "Testify" and "Love Struck Baby," within an onslaught of white-hot intensity just shy of an hour that wholly justifies the rousing intro to the band as well as the raucous response of the club's attendees.

Never before released, the inclusion of this set, originally designed for Philadelphia radio promotion, is even more of a bonus than the alternate take on "Tin Pan Alley" (aka The Roughest Place in Town)" included on the studio portion of Texas Flood: 30th Anniversary Legacy Edition. Add to that the polished yet punchy sound quality of both recordings, magnified by digital remastering, and the impact of Stevie Ray Vaughan and Double Trouble continues to resound thirty years after its debut.