Testimony: A Tribute To Charlie Parker

By IAN PATTERSON
November 20, 2013
Sign in to view read count 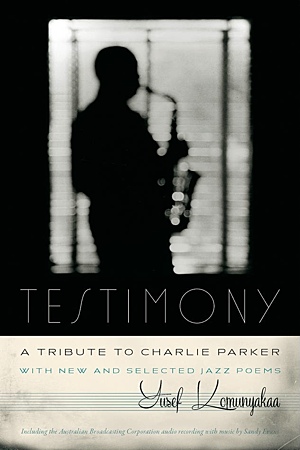 In terms of his global influence and enduring legacy, alto saxophonist Charlie Parker was unquestionably one of the most important artistic figures of the 20th century. Almost sixty years after his premature demise Parker's musical DNA can be detected almost everywhere jazz is played. Parker's music—and in no small measure his myth—has inspired countless jazz musicians but it has also inspired authors, painters, film makers and a surprising number of poets to pay their own form of tribute. Testimony represents the jazz poetry of Pulitzer Prize-winning poet Yusef Komunyakaa, and its centerpiece is a libretto inspired by Parker's life and music.

Commissioned by Australia's ABC radio, Testimony was first published in Brilliant Corners: A Journal Of Jazz & Literature in 1997 and republished in Komunyakaa's collection Thieves of Paradise (Wesleyan Press, 1998). In 2002, music set to Testimony—composed by saxophonist/arranger Sandy Evans—was performed with two dozen jazz musicians and singers of the Australian Art Orchestra at the Sydney Opera House. This book brings together for the first time, Komunyakaa's libretto and—on two accompanying CDs—the complete ABC recordings of Evan's music. The book is fleshed out with a further 28 of Komunyakaa's striking jazz poems, plus interviews with the poet, Evans and others closely related to the production of Testimony.

Komunyakaa's epic poem traces Parker's trajectory from his early years, "blowing ravenous after-hours 'til secrets filled with blues rooted in Mississippi mud...when he first played laughter and crying." We follow Parker washing dishes at Jimmy's Chicken Shack just so he could hear pianist Art Tatum. We hear Parker practicing until "he could finally play everything in his head," until "He could blow insinuation. A train-whistle in the distance, a gun-shot through the ceiling, a wood-warbler back in the Ozarks at Lake Taneycomo, he'd harmonize them all."

The biographical information that Komunyakaa draws on for the framework of his poetic narrative come from Gary Giddins' Celebrating Bird: The Triumph of Charlie Parker (Beech Tree Books, 1987) Komunyakaa's prose, however, takes its greatest inspiration from Parker's music, his human frailties and complexities. Color features frequently in Komunyakaa's lines; tangerine, Georgia peach, black satin, midnight-blue, oceanic sky—reflecting the exotic colors of Parker's language. One of Komunyakaa's most memorable allegories likens Parker to an exotic bird: "Like a black cockatoo clinging to a stormy branch with its shiny head rocking between paradise & hell, that's how Yardbird listened. He'd go inside a song with enough irony to break the devil's heart."

Komunyakka uses the device of multiple voices to portray Parker's humanity—the conflicts and paradoxes that made up his persona: we hear from an anonymous childhood friend, musicians, Baroness Pannonica de Koenigswater, and most poignantly of all from Parker himself, in his telegrams to his wife Chan following the death of their child. The different stories reveal Parker the lover of Dali, Bartok, Stravinsky and Heifetz, and the naked, drug-addled figure removed to Camarillo hospital in a strait jacket. From an image of a small boy clutching a hair brush to his last hour, when Parker "died laughing at jugglers on the Dorsey show," Komunyakaa's portraiture is consistently emotive.

As for the music, Evans' sumptuous score succeeds in doing Komunyakaa's prose absolute justice. Evans' layered arrangements perfectly capture the rich gumbo of blues, gospel, country, show-tunes, classical and Afro-Cuban influences that colored Parker's language. Parker's soundscape from Kansas City to New York is filled with the music of chain-gangs and train whistles, the strut of foxy women in high-heels "clicking like a hi-hat," laughter and the ghosts of the past—the "pain and glitter" that Parker blew.

Michael Edward-Stevens' narration of the poem is beautifully accentuated by Evans lush and vibrant score while a number of singers interpret various parts of the poem. Kristen Cornwell's heartfelt blues on "Purple Dress," veteran Joe "Bebop" Lane's sparkling scat improvisations on "Barrow Street" and "Moose the Mooch" plus Michele Morgan's operatic performance on "A Soft Touch for Strings" stand out, but in truth all the vocal performances are highly impressive.

What unites Komunyakaa, Parker and Evans is their bold vision and soulful, fearless artistry. It's a very potent combination and the triumphant results of Testimony pay stunning tribute to Parker and his music. As the 70th anniversary of Parker's recording debut as leader and the 60th anniversary of his death approach, new performances of Testimony would surely provide a most fitting encore. In the meantime, Komunyakaa and Evans' indispensable document—inspired and inspiring—is a must for Parker fans.