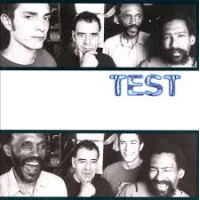 In the purest sense, free improvisation is all about communication. When it succeeds, a group of individuals can speak with a single larger voice. New York City's TEST does exactly that: fuse four highly distinctive individual voices together to form one searing rollercoaster of musical experience. It certainly doesn't hurt that the members of this quartet collectively have well over half a century of experience playing in this tradition. And they've been playing together on the streets of NYC since 1992.

On the horns stand virtuoso multi-instrumentalists Sabir Mateen and Daniel Carter, who abandon the usual custom of trading solos for a simultaneous head-on saxophone assault. Their twisting, angular lines constantly interweave and exchange ideas. Joining these players in the unfolding of the story are drummer Tom Bruno, a peppery and detailed expressionist; and bassist Matthew Heyner, a 27-year old former student of William Parker. They integrate their respective voices quite seamlessly with the other members of the group. Heyner's voice on the bass is amazingly mature, anchoring the harmony of the group without bogging anyone down.