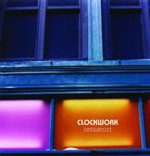 This unique jazz vocal group came to public attention in 2004 by winning the Bay Area Harmony Sweepstakes A Cappella Festival with its arrangements of Gershwin songs. The musicians describe themselves as "a cappella with a jazz point of view," and I don't suppose this is too far off the mark. It's a throwback to the renaissance of jazz vocal groups in the 1970s and 1980s, with names like The Ritz, Rare Silk, and Singers Unlimited. Although none of these groups sang in an a cappella style, and some of them were short-lived and covered different types of jazz group vocals, what bound them together, along with several other organizations of the day, was that they sang in the five-part harmony style of artists from the 1950s and 1960s. Rare Silk decided to plug in and go for a rock market, and Singers Unlimited remained committed to the style of The Hi-Lo's (two of the four members were ex-Hi-Lo's).

In order to get this project off the ground, Clockwork enlisted the advice of Richard "Bob" Greene, bass singer for the Bobs, a genre-bending a cappella group, who also has freelanced for the musical director of Chanticleer (Joseph Jennings). Group members Angie Doctor and John Paddock have studied under Phil Mattson, whose arrangements have appeared in the music of Chanticleer, Manhattan Transfer, and the Four Freshmen.

All that being said, Clockwork presents eleven intriguing tracks from varied backgrounds in a fairly short album. What work best are the jazz standards like John Coltrane's "Moment's Notice" (I've only heard the George Johnson lyrics from the early 1980s); a roaring version of "Donna Lee" (here credited as "Back Home in Indiana," the original source of Charlie Parker's inspiration); and Richie Cole's "D.C. Farewell," lyrically turned into an Eddie Jefferson tribute.

Since all of these tunes were full-tilt works inspired by Lambert, Hendricks & Ross and others, I was interested to find that group member Stephen Saxon was the responsible party. He also added new lyrics to the Schwartz & Dietz standard "Rhode Island Is Famous For You." During certain selections, Clockwork definitely reflects the vocal techniques of the classically-trained Swingle Singers, bringing yet another influence into the album.

And (So) What If I Don't; My Baby Just Cares For Me; Bluebird; D.C. Farewell; Donna Lee; Creep; Rhode Island Is Famous For You; Moment's Notice; Little Girl Blue; Variation #1 on "Nightwatch"; Big Cash Deal.