Tessa Souter: Beyond The Blue 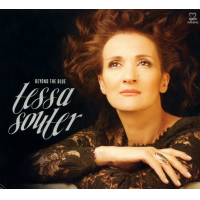 Vocalist Tessa Souter is deservedly becoming treasured among jazz fans and musicians alike. She combines the sonority, vocal range and discipline of a classical lieder soprano with subtle and sultry jazz inflections. Everything she sings is meaningful, well thought out and in good taste. She works with the best instrumentalists and has a consummate grasp of both swing and the modern jazz idiom. All these elements are manifest in her newest album, Beyond the Blue, where Souter takes familiar themes from classical music, adds her own lyrics to most of them, and delivers what are essentially a new set of songs that are poetic in impact. The original melodies are all there to be heard, but the mood and interpretation are totally Souter, and all in the jazz idiom, expressing nuances of romance, love and intimacy. She is helped enormously by her instrumentalists, who play masterfully, supporting and elaborating on Souter's vocalizations with finesse and flair.

The album begins gently with Souter's "Prelude to the Sun" based on the second movement of Beethoven's Symphony No.7. While Beethoven wrote a dance-like piece, Souter takes it more slowly, and the lingering dance feeling makes it somewhat like a madrigal, as she refers to "A glorious morning ... singing in my heart."

In "The Lamp is Low" Souter gives Ravel's "Pavane" a midnight dreamy feel, reminiscent of her album Nights of Key Largo (Venus Jazz, 2009). The seduction builds as she asks her lover to "dream the sweetest dream we'll ever know," with her inflections on "sweetest" being perhaps the most decadent single utterance ever sung on a recording, as if Souter became a channel for Marlene Dietrich for a few milliseconds.

"Dance with Me" uses the melody from the popular song "Stranger in Paradise" from the Broadway show Kismet. It is most notable for a flavorful tag ending by Gary Versace on accordion, his presence being a real coup that gives the disc a special boost. "Chiaroscuro" is based on the familiar Albinoni "Adagio" that appears on many new age recordings. Souter makes this tune her own, however, adding sensitive and intimate lyrics lauding newfound love: "Holding the love that's been born/ Up to the light of the dawn." There is a beautiful tenor saxophone solo by Joel Frahm, offered with a laid back Stan Getz-like sound, and an artful piano solo by Steve Kuhn, which taken together provide a feeling of theme and variations on a melody that wants to insinuate itself into the listener's consciousness.

Souter then segues to "My Reverie," a swing era pop song based on a Debussy piano piece. She takes it at an up tempo, leaving no doubt who is in charge. The song "En Aranjuez Con Tu Amor" will be familiar to many listeners from trumpeter Miles Davis' Sketches of Spain (Columbia, 1960). The bass and piano evoke a Spanish mystique via a unison drone as well as hints of flamenco music. Frahm again solos beautifully.

Brahms' Symphony No. 3 and its melody that Souter uses for "Sunrise" were composed during Brahms' idyllic mid-life trip along the Rhine River. Souter captures the feeling of the countryside and the music it stirs in the composer's heart by such lines as "Winter brings spring to me; nightingales sing to me." It is clear that she herself is the lark ascending in this album.

"Baubles, Bangles and Beads" is another standard from Kismet, and Souter here stays with the original lyrics. The simple harmonic structure of this tune offers opportunities for a vibraphone solo by Joe Locke, followed by a double time piano solo by Steve Kuhn, and a quality bass solo by David Finck. The 3/4 waltz time is highlighted in the last chorus with artful work by Billy Drummond, one of today's finest drummers in the Elvin Jones tradition.

"Beyond the Blue" offers tender lyrics with a touch of sadness a la Chopin, such as the phrase, "out of a dark and cold starless sky, beyond the blue." There are echoes here of the quiet, minimalist feeling of Antonio Carlos Jobim's ballads. The song rocks softly like a mother holding a child. "The Darkness of Your Eyes" surprises with an upbeat, swing tempo, much faster than the root melody of Faure's "Pavane." Indeed, it is the liveliest swinging track of the set. "Noa's Dream" maintains the upbeat stance. Souter refers metaphorically to her lover as a soaring bird: with an allusion to a jazz standard, "beautiful dreamer, you are a skylark." Frahm's saxophone solo and Locke's vibraphone both capture the freedom of the flying, singing bird.

Faure's "Elegy" is a mournful lament, but Souter turns it into a "Brand New Day," which begins with Versace's accordion suggesting a gypsy atmosphere and which soon takes on the rhythm of a Hungarian dance. The piece transmutes into a bebop interlude and returns to the dance rhythm. Like all the best jazz vocalists, Souter gives her sidemen the respect and space they deserve, and the ensemble playing on this set merits high praise on its own.

Prelude To The Sun; The Lamp Is Low; Dance With Me; Chiaroscuro; My Reverie; En Aranjuez Con Tu Amor; Sunrise; Baubles, Bangles And Beads; Beyond The Blue; The Darkness Of Your Eyes; Noa's Dreams; Brand New Day.