By MARK SULLIVAN
October 8, 2017
Sign in to view read count 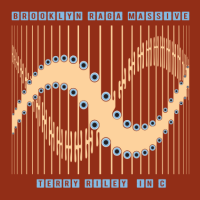 In C has been arranged for various groupings over the years, and this is not the first employing non-Western instruments. Montreal's Ensemble de la SMCQ's 1997 performance (Atma Classique, 2000) included sitar and tabla (along with Western instruments and chorus), and featured a raga-style free introduction. Before that, the Shanghai Film Orchestra performed it entirely on traditional Chinese instruments (Celestrial Harmonies, 1989). After hearing an early performance recording, Terry Riley suggested that the Brooklyn Raga Massive use the basic form of the composition, but open it up to solos based on the patterns. So this performance fully embraces both Indian instruments and Indian classical music performance tradition.

The performance begins with "Raga Bihag Alap," the improvised, unmetered introduction that introduces the raga in a traditional performance. As the piece proper is begun, the part of the Pulse (the metronomic beat usually played on a piano) is introduced by tabla. Then the group begins moving through the patterns, which are banded in groups on the recording ("Cells 1-8" through "Cells 49-53 (Jhalla)"). In one way the piece sounds very familiar, especially the sound of the opening phrases, despite the unexpected sound of the Indian instruments. When there is audible improvisation—e.g. the bansuri solo in "Cells 12-13"—it grows out of the patterns so naturally that it sounds like it had been hidden in the composition all along, waiting to be revealed. The fast jhalla that concludes the performance is another traditional raga performance gesture, which again sounds completely natural in context.

Terry Riley is a longtime practitioner of Indian classical vocal music, having studied with Pandit Pran Nath. It seems appropriate that this performance should bring his early composition fully into that world, and it's a fresh view of a piece that was already full of possibilities.