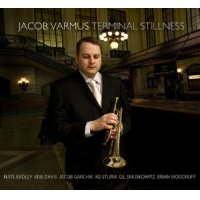 Jazz is always caught up in the idea of looking forward or backwards, but whatever happened to the idea of looking around? Much ado about movement—toward the future, the past, the next chord in the progression or the next stage of a career—often gets in the way of the simple act of creation. The jazz community, by-and-large, prefers the time-lapse version of music, but that doesn't mean that some within this tight-knit club aren't fond of stills. Take trumpeter Jacob Varmus for example. While he does the hustle-and-bustle that comes with New York living, his music doesn't always reflect the idea of constant motion. In fact, this particular project was built to stand as the antithesis of that ideal.

Terminal Stillness is a nine-song suite built around the concept of "slow motivic development." Much of the music presented herein generally evolves and grows in circular fashion, expanding its circumference and reach like ripples from a small pebble tossed into a lake. The journey is fascinating, but an end point is of little interest to Varmus; he'd rather enjoy the trip than simply get from point A to point B.

To some extent, Varmus runs the risk of misrepresenting the very title he chose for his album, but that turns out to be a good thing. Terminal Stillness, in name, projects a static face and bland constitution, but the music actually glows with the warmth of life; in other words, "slow motivic development" does not a boring album make. Uncertainty, centered on slight growth rates, certainly figures into the picture, but much of the music also radiates energy. The whole band is responsible for balancing these forces, but Varmus is the chief of the tribe. His trumpet is the force that binds, acting like a beacon in a haze of solitude and a guide through the musical mists of his making. Sometimes, he even acts as the stabilizing agent and the wildcard within a single piece. Pianist Kris Davis and guitarist Nate Radley perfectly reflect and refract what comes from Varmus' horn, while drummer Brian Woodruff shades behind the whole bunch or pushes them along; his drums also waltz into the center aisle during "Slide Rules," which proves to be a quirky delight.

Many a long-form work tends to be better digested in small portions, but the whole is greater than the sum of its parts here. Terminal Stillness is best appreciated in its entirety, unfolding and unfurling in the ear.