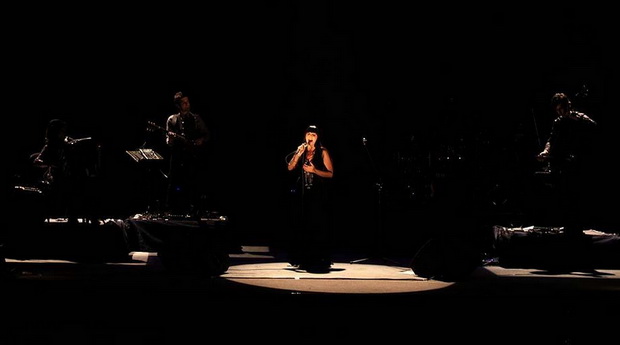 There is a secret love affair between Teresa Salgueiro and the city of Belgrade that has been happening for many years. For the past several years, with her former band Madredeus or with her many solo projects, this city has been a regular stop on the renowned Portuguese singer's many tours. Nevertheless, this accomplished singer—with a voice and charisma that have been enchanting audiences around the globe for many years—has built a regular and dedicated audience that is always eager to see and hear what new music she has to present.

The concert at the Dom Sindikata theatre in Belgrade was part of the promotional tour for her upcoming album, O Misterio (Resistenci, 2012). Presenting new songs during a course of a tour is not something unusual, but embarking on a tour with only songs from an album that hasn't be en released and promoted in advance is totally unheard of, not to speak of brave. But such is the strength of the relationship that Teresa has forged with her audience—one that relies on mutual trust and proven quality. To her credit, this was the seventh concert she has held in this city and all of them were nothing short of remarkable and memorable.

There was a genuine air of excitement at the theatre, prior to the show. As the lights were dimmed, there was a sense of anticipation and, for the next hour-and-a-half the singer delivered an enrapturing performance. Playing in the relative intimacy of Dom Sindikata, Salgueiro and her band gave a master class in performance. Hearing these songs for the first time was like being invited to an exclusive first listen of an album that has an adequate title for the occasion—O Misterio (The Mystery). The new music marks a big change for Salgueiro, as these were songs that were completely self-penned. This is the first time in her career that she has been the author of both music and lyrics. The new band also marks another stylistic change of direction as it consisted of a group with more standard instrumentation: bassist Óscar Torres; electric guitarist André Filipe Santos; drummer, percussionist and electric guitarist Rui Lobato; and accordionist Carisa Marcelino.

Since the songs were a novelty for the audience, Teresa kindly addressed the people in attendance before the start of each song by making brief introductions about the theme, the inspiration or the meaning of the lyrics. She performed 16 songs, all but one that will appear on the album. The songs had titles such as "A Batalha," "Cantico," "Ausencia," "A Fortaleza," "A Estrada," "A Mascara," "Lisboa" and "A Paixao," and were almost magnetically hypnotic, with sinuous melodies and beautiful harmonies. The inclusion of the accordion made a big difference for the recognizable lyricism. While the music partly paid homage to the past, at the same time it sounded like it was pushing into uncharted territory. The musicians created different ambiances and moods on their instruments, with various influences and sounds coming to the fore, thus creating a beautiful mélange.

However, the true revelation that night was Salgueiro herself. She may not have played an instrument (except for occasional percussion for a short instrumental piece) onstage, but her with ardor, voice and charm, she had her audience listening intensely. Salgueiro's enchanting voice is really a formidably potent and emotionally limber instrument. It floats and flutters. Simultaneously strong and tender, she sang these songs with an obvious display of love for what she does, and does so with immense spirit, grace and style.

Overall, this performance was an artistic triumph. The music of Teresa Salgueiro and her band challenged the senses and eventually rewarded them.