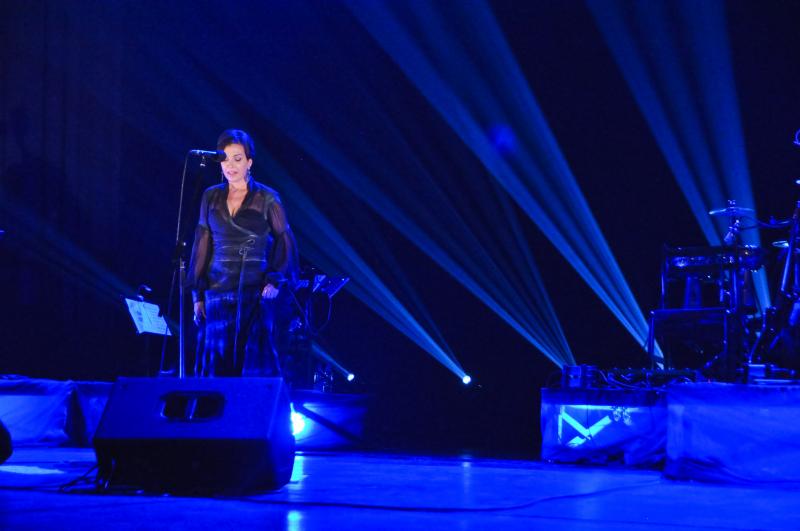 Moving and majestic, Portuguese diva Teresa Salgueiro's performance at the city's annual world music festival transformed the concert hall in Bitola into the most intimate of settings with the international premiere of her newest album O Horizonte. (Lemon, 2016) Salgueiro has a reputation that precedes her since the days with the premiere Portuguese band Madredeus, but she just released a new album and this was a place where this music received its first international premiere. Apart from her immense musical talent and impressive and unique voice, Salgueiro's talent also lies in how she can immediately make her concerts an intimate occasion and this was no different. Deep and profound, her performance at the festival was a perfect example how to treat your songs, band members and your audience with warmth and respect.

This performance showed her more at ease in front of a reverent audience, as she and her band ran through a wide selection of material that primarily gave accent to O Horizonte but also featured selections from various corners of her illustrious career and a few surprises. The whole performance started like a charm with lowly lit lights which helped to achieve a cinematic effect. All throughout the evening, the light technician carefully painted the stage like a huge canvas with light and shade to great effect—it was moving and unobtrusively magical.

What she gave accent to was the new album. Whenever she tours to promote a recording she always gives emphasis on the new material which provided the backbone for the set list. She began with her slower, more pensive songs like "Horizonte," "Esperanca," "A Cidade," "Desencontro," "O Vento," "Exodo." Most shows packed with unfamiliar material would test an audience's patience but the songs themselves from the new album were so good that the audience was delighted by their inner fire and melodicity. Salgueiro forges such a deep and palpable connection to her music, it's impossible not to feel a similar closeness and affinity while listening. She projected behind and among the musicians, to illustrate the stories with both charm and vulnerability, creating a potent theatrical dimension. Salgueiro wore long, confining dress and her subtle movements came from the hips upward. The audience was humbled by her poise and elegance and her captivating violin-like voice.

She demonstrated a range, depth, intelligence, emotion and quality of stylish poise that very few can match. One of the surprises was the beautiful rendition of Amalia Rodrigues' classic "Barco Negro," a tender love ballad. It was slow and soft, but the melodies were powerfully compelling as her singing. A real treat were songs from the repertoire of her former band Madredeus—"Guitarra," one of the band's most signature songs made famous by film director Wim Wenders' ode to Lisbon —"The Lisbon Story" and another timeless classic, "Haja O Que Houver." Even though she and the band parted ways many years ago she not singing these gems is like Paul McCartney not singing any Beatles songs. These wonderful songs radiated with great warmth that easily permeated every corner of the enormous concert hall.

Apart from songs from her illustrious career, she also treated the audience with a selection of Mexican songs that were, as told by her, inspired by their trip there so the band rearranged them. The result to that were songs that were so close to her own -"Cancion de Mixteca" and "Fina Estampa" received a total remake while retaining their melodies.

Her demeanor was humble and courtly, profusely thanking the audience, introducing the songs and the musicians. Often her songs would elicit eruptions of applause as with the help of her fantastic band she generated a real emotional heat. The music truly exposed every vocal nuance and she was mesmerizingly vulnerable on the closing set of songs with selections from O Misterio like the title song, "Lisboa" and another gem from the Madredeus catalog "O Pastor." Every concert by Salgueiro that I had the opportunity to witness was unique and powerful, and she easily creates an inviting, intimate bond with the audience. She and her band earned a well-deserved and lengthy standing ovations at the end of the concert.