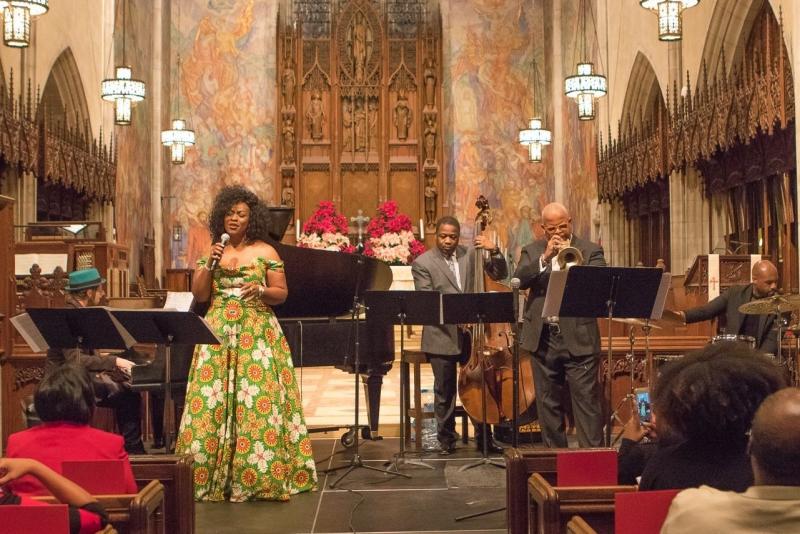 The idea of inviting a jazz combo to help ring in the Christmas season isn't new to the folks at Christ Church Cranbrook. The Episcopal congregation in Bloomfield Hills, Michigan has sponsored a Christmas Eve jazz mass for three years running, with bassist Rodney Whitaker's hand-picked band becoming an essential holiday staple for many church members and guests. But this is just one aspect of the church's mission to engage the jazz world, as Rector Bill Danaher has been eager to forge musical partnerships with Detroit-based cultural organizations like the Carr Center, which will be collaborating with the church when it hosts an upcoming performance of Duke Ellington's Sacred Concert in 2018. Its historic neo-Gothic architecture alone renders Christ Church a magnificent space for such high-profile musical endeavors.

It thus made perfect sense to find Terence Blanchard on the schedule for a free Christmas concert on Saturday, December 23. The Grammy award-winning trumpeter, composer, and Fred A. and Barbara M. Erb Jazz Chair of the Detroit Symphony Orchestra brought a quintet for an evening of seasonal favorites that delivered plenty of holiday delight to over 500 enthusiastic listeners. And with all the proceeds of a goodwill offering going to Haven, a local nonprofit dedicated to supporting victims of domestic abuse and sexual assault, there was even more reason to rejoice at such a wonderful opportunity to commemorate the season.

Blanchard was joined by some old friends for the performance. Rodney Whitaker held the bass duties for Blanchard back in the 1990s during his tenure with Columbia Records, and pianist Aaron Parks joined him in the early 2000s on some of his Blue Note dates. The relative newcomers were vocalist Quiana Lynell and drummer Nate Winn, who rounded out the quintet.

Blanchard introduced Lynell, this year's winner of the Sarah Vaughan Vocal Competition, as a recent discovery. But she took the stage with poise and panache and brought a warmth and lighthearted humor to the night's proceedings that won the crowd convincingly from the opening tune, "Sleigh Ride," forward. Although the band's repertoire hewed closely to some of the most well-known Christmas standards, Lynell's creativity and impressive range fueled every piece, making each one come alive with an irresistible freshness.

Fans who came expecting the kind of boundary-stretching approach of Blanchard's E-Collective group (as featured on 2015's Breathless, for instance) may have been somewhat disappointed, as the band stayed locked into straight-ahead jazz mode. No excursions into electronics or R&B-flavored material were on offer. But it was an imaginative program nevertheless. Expansive, modal arrangements of "Sleigh Ride" and "Silent Night" left plenty of room for Lynell's vocal artistry as well as opportunities for Parks and Blanchard to stretch out, while "Let it Snow" pivoted back and forth between a laid-back, funky rhythm and straight-up swing. "Have Yourself a Merry Little Christmas" may have swung the hardest, with Lynell's perfect syncopation and gospel flourishes combining with Blanchard's feisty upper-register flurries to provide one of the evening's highlights. And the gritty blues-based treatment of "Merry Christmas, Baby" was the band's ultimate chance to let loose, with solo opportunities for all.

The music was just as stimulating during the quieter moments. Parks's gorgeous harmonic touches on "Christmas Song" gave new life to that most shopworn of holiday classics. And Lynell's astonishing rendition of "O Holy Night," accompanied only by Parks, revealed her prodigious classical training as she hit every note with ease, taking the audience with her into more devotional territory. While the entire band was superb, in many respects this was Lynell's night: she left no doubt of her talents as a skilled chanteuse and a major vocal presence.

By the end of the evening, Blanchard's quintet provided more than just memorable music performed with grace and dedication. Even more importantly, audience members were given another reminder of what the irrepressible spirit of jazz can do to enhance the yuletide season.