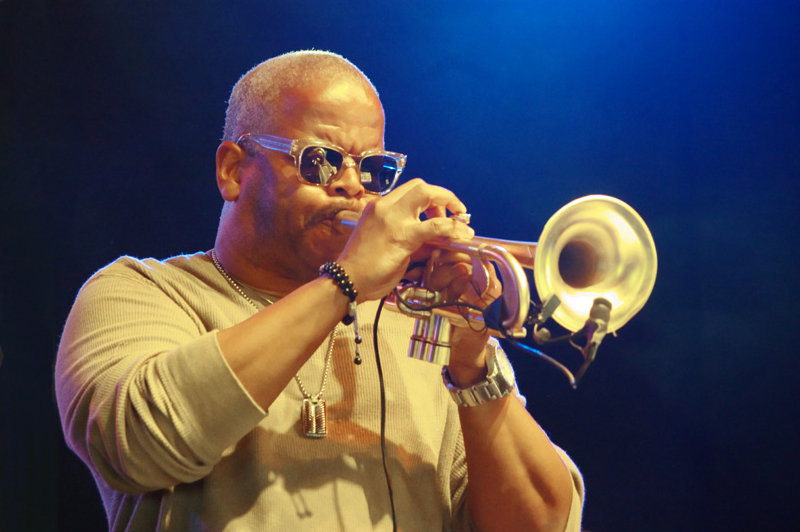 It's meant as a compliment on originality, not a sign of mere imitation, to say there was a heavy Miles Davis vibe in the air when Terence Blanchard and his E-Collective group hit the snug-sized stage of the Ardmore Music Hall. Like fellow trumpeter Davis, Blanchard refuses to sit still and doesn't hesitate to forthrightly speak his mind. Taking a cue also from his old boss Art Blakey, he surrounds himself with fantastic younger players that he can learn from as much as he teaches. It was a performance full of futuristic sounds and badass attitude. This crew isn't interested in what jazz has been—or even what it is now—so much as what it's going to become next.

Amid the usual piano, drumkit and tech gear set around the dim violet-lit stage, the leader's spot in the center consisted of a small electric synth behind a table with a laptop. Blanchard spent a fair portion of the night poking keys, twiddling knobs and sometimes triggering samples. Most of these were recordings of people's voices garbled like they were coming through a staticky radio signal, suiting the night's urban rhythm-dub vibe splendidly. The music was wild, funky, dirty, sometimes angry and occasionally gorgeous.

Much of the set overlapped with their most recent statement Live (Blue Note, 2018)—pronounce the title either way as you see fit—many of whose pieces are themed around the nation's epidemic of gun violence and the necessity of standing up against it. Blanchard had no need to preach, however. He took a brief mid-set moment to introduce the band and briefly explain the thinking behind the tunes; this was probably the point of those samples as well. Otherwise, he simply stood back and let the music say everything that needed to be said. His trumpet sang and wailed, David Ginyard's bass and Oscar Seaton's drums stirred up some heavy voodoo, and their collective fervor conveyed the underlying anger and determination more than any words would have.

Blanchard ran a tight ship, directing the proceedings with economical gestures as deliberate as his distorted stabs on the horn. He'd briefly point out one band member or another when their solos earned applause. A synth line here, some echoing double-tracked trumpet there, and he'd soon be hanging back again thinking out his next move. Fabian Almazan similarly juggled his wild piano pounding with a small arsenal of electronics, opening with the haunting strains of Marcus Miller's "Hannibal" (another late-period Davis staple) and spinning melodic craziness like a mad scientist at the keys.

The most beautiful strains actually came from Charles Altura's guitar, particularly the layered haze of reverb with which he introduced his own composition "Unchanged." In other spots he was hard and sludgy as a garage-rock grunger. The dynamics beautifully showed how in-tune everyone has grown in their time together, making a band Blanchard declared he "feel[s] very blessed to be spending time with." From the bluesy flight of "Dear Jimi" to the churning frenzy of "Kaos" and "Soldiers," the set loomed large and intense and ended by seriously spooking the hell out of the place.

The encore went back what Blanchard called "the tune that got this all started"—his groove-jam theme "Talk to Me" from the film of the same name. It was sort of a relief to settle down with something straightforward, though the band drew out enough shadings with their rotating solos to make it feel anything but simple. Whatever the mode, simple or loud or frenzied, it was a night of music to be not just heard but felt deep in the bones.