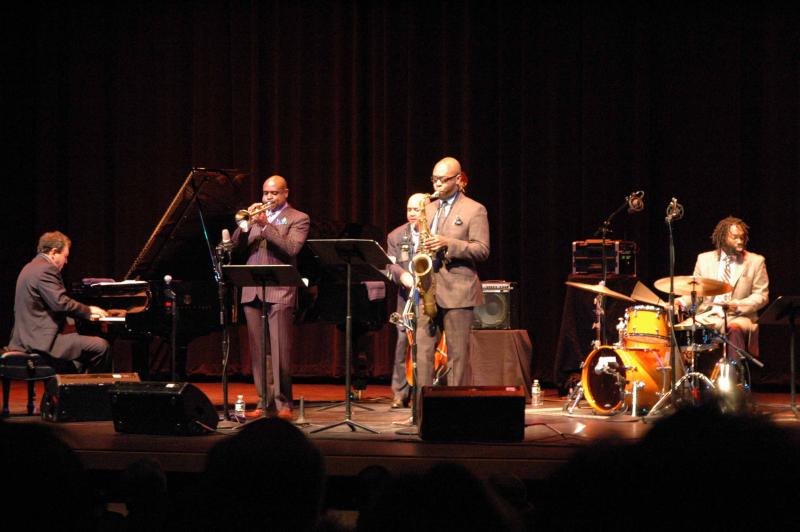 This concert was one in a highly successful series which has been curated, coordinated, and choreographed by Danilo Pérez for nearly a decade, so far in the 2011-12 season honoring Philadelphia legends such as Jimmy Heath and Benny Golson, and coming up on April 14th, McCoy Tyner. Trumpeter Lee Morgan (1938-1972) came of age in this city, befriended and mentored by locals such as drummer Mickey Roker and pianist Don Wilson. He quickly proved his talent to Clifford Brown, Dizzy Gillespie and others. Moving to New York, he brought his gifts to bear on recordings and live shows with the likes of Hank Mobley, Art Blakey and the The Jazz Messengers, and a legion of other top players of the late 1950s and the1960s. Morgan played a significant role in the development of the hard bop idiom through his uniquely evolving trumpet style, his capacities as a leader, and his compositions and arrangements, many of which took on the coloring of tight-fisted blues, captioned by his biggest hit, "The Sidewinder." His life was cut short at age 33 when his wife, jealous of an affair, shot him outside of the nightclub Slugs in the East Village of lower Manhattan. Remarkably prolific, he had already made 25 recordings as a leader for the Blue Note label.

Morgan's trumpet style combined the sonority of Clifford Brown with the Roy Eldridge-inspired articulation of Fats Navarro and others, and has influenced the sound of all trumpet players who followed him. Terell Stafford, for example—together with an outstanding group consisting of Tim Warfield on tenor saxophone, Bruce Barth on piano, Peter Washington on bass, and Dana Hall on drums, he cooked up a glorious set of tunes, mostly Lee Morgan originals, artfully capturing the latter's heavy rhythmic pulsations and rich sonics combined with sophisticated bebop and hard bop improvising. At times, it felt as if Morgan was in the room, and at other junctures, the group let the stops out in the more contemporary idiom that Stafford himself represents. The relaxed, coordinated feel of a working band was always there, and this group, while largely independent practitioners, has often worked together before, including on Stafford's latest recording, This Side of Billy Strayhorn (MAXJAZZ, 2011.)

The group immediately swung into action with "Hocus Pocus," a lively number, which like all the other tunes except "Candy," was a Morgan original. The group jelled together well, and their soloing allowed sufficient room for their own individual styles. Here, Barth, who did an extended stint as Tony Bennett's accompanist, was especially adept in capturing Herbie Hancock's piano approach from the 1960s. "Petty Larceny" featured an outstanding solo by Tim Warfield, who was able to install harmonic complexity into an otherwise uneventful chord structure. "Yantz," from the Jazz Messengers' iconic album, Night in Tunisia (Blue Note, 1960) featured an energetic, highly charged solo by Stafford, which brought out his stunning sound and technique on the instrument. Warfield took advantage of the slower pace of this composition to develop still more subtle dissonances and harmonic connecting notes. Like a stealth drone surveying the landscape, Warfield proved himself capable of ruminating subtly on the music's structural possibilities.

"Candy," a popular swing tune recorded by Morgan at age 19 (Candy, Blue Note, 1957) represented a lively shift into a double time bebop mode which bassist Peter Washington brought to a climax with an unaccompanied bass solo that was so artful it could be transcribed for study. (Radio station WRTI-FM recorded the concert for later broadcast, so it's not impossible this could be done.) Washington is one of few remaining upright bassists who consistently spins off rapid-fire single notes with no fancy attempts at inflicting harmonies on the instrument. The deceptive simplicity of his approach gave it a particularly pleasurable and swinging aesthetic, and in addition to his solos, he flawlessly backed the other players throughout. No wonder he is, and has long been, a first-call bassist for so many musicians.

"Yes I Can, No You Can't" gave drummer Dana Hall an opportunity to manifest a heavier style of drumming, with echoes of Sonny Payne's highly driven work with the Basie band. At various junctures, he did some exceptional brush work and at times caught Stafford's energy and took the drums out of town. There was then a quieter interlude where Stafford and Warfield traded fours. If it had been a contest, Warfield would easily have won as his subtle changes left Stafford in the improvisational dust.

The post-intermission chat, a traditional element of the Jazz Up Close Celebrates series, consisted of WRTI DJ Maureen Malloy raising questions and issues with Stafford. The latter emphasized his indebtedness to the late great Art Farmer, whose disc Something to Live For: The Music of Billy Strayhorn (Contemporary, 1987) partly inspired Stafford's recent CD of Strayhorn's compositions. It was unfortunate that Lee Morgan's work was hardly touched upon, leaving a noticeable vacuum in the discussion.

Morgan's "Heavy Dipper" provided a starter for the second set with a straight-ahead rhythm that gave Warfield an opportunity to incorporate a Coltrane touch into his playing. "Stop-Start" provided Hall with a foil for an extended, hard driving drum solo. The evening concluded, perhaps all too deliberately, with "Sidewinder," which but for Stafford's brilliant soloing was too imitative of the classic Lee Morgan arrangement. However, a nightcap was hardly needed to finish off an exciting evening of music that amicably captured Lee Morgan's essence and legacy.