By WOODROW WILKINS
April 7, 2008
Sign in to view read count 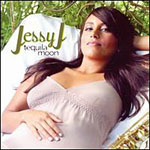 It's hard to imagine Jessy J as one who wanted to play straight-ahead jazz. Yet that was the type of demo she submitted to producer/guitarist Paul Brown, whose style and influence in recorded music is about as far from straight-ahead jazz as one can get. To no surprise, the relationship that developed between Brown and the saxophonist/vocalist has Jessy J fitting comfortably within the smooth jazz format, although her debut, Tequila Moon, has a Latin theme.

Born of Mexican parents in Portland, Oregon, and reared in Hemet, California, Jessy J has deep roots in Latin music. She was a huge fan of Cannonball Adderley and John Coltrane—a further contradiction of her format-friendly debut—but also loved pop. In addition to Brown, her professional career has had her in recording sessions or on stage with such artists as Michael Bublé, The Temptations and Michael Bolton. She's also forged bonds with saxophonists Mindi Abair and Kirk Whalum.

ADVERTISEMENT
Jorge Bem's "Mas Que Nada" has been covered many times over. With Jessy J setting aside her sax in order to sing lead, this cover is nicely done but lacks the energy of previous versions, particular one done by Al Jarreau. Still, Jessy's charming voice makes this worth listening to, with drummer Sergio Gonzales helping it with some adept cymbal work.

One of the better showcases for Jessy J's talent as a songwriter and musician is "Fiesta Velada," which she co-wrote with Brown. One major plus is that this straightforward Latin piece lacks the cookie-cutter, smooth jazz production which overpowers most of the songs in this set. Vally, Peterson, Seaton and Garcia complement the leader while Jessy J and her tenor have a party.

Tequila Moon is a nice overall debut for Jessy J. The selections all clock in at less than six minutes, with the majority between three and four. That certainly increases the probability of airplay on smooth jazz, adult contemporary, or even easy listening stations. Unfortunately, the commercialization of this recording dilutes the beauty of Jessy J's performance.