By NENAD GEORGIEVSKI
July 7, 2012
Sign in to view read count 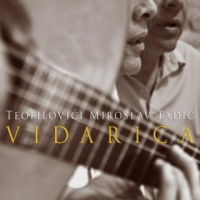 There are types of music that grow on you with every new Listen, and then there are types of music that fade away when played too often. Vidarica—the collaboration between guitarist Miroslav Tadić and vocal duo the Teofilovic brothers— definitely is one of those rarely crafted albums that grows with each new listen. In a way, this is a dream pairing and reveals them to be a perfect match for each other. It has been a very long time coming, but it has been well worth the wait.

For someone of his stature and background Tadić has followed quietly his muse down into the corridors of musical and cultural history. Few musicians have as diverse a musical background as he does. He is a professor of guitar at the prestigious CalArts University in California, and has forged an intriguing, eclectic and diverse guitar voice and body of work. As a tireless explorer of different musics, he has traversed and immersed his heart in various geographical and musical contexts, be it classical, North Indian, jazz, flamenco, bossa nova, rock, avant-garde, and above all, Balkan music.

Both parties met through Macedonian guitarist Vlatko Stefanovski when he and Tadic played their first concert as a duo in Belgrade in 1999, promoting the watershed record Krushevo (MA Recordings, 1998). The duet with Stefanovski opened the doors to Balkan frontiers for Tadić and somehow it was natural for him to work with the Teofilović twins—unique singers and treasure hunters of forgotten, rarely performed and not overused folk songs, mainly from their native Serbia. With a vocal pairing that resembles Simon and Garfunkle, the brothers are known to have infused a new life into these songs in a completely authentic and yet original approach.

In Serbian, "Vidarica" means either a woman that heals with herbs or a spring with healing powers. Health is a matter of balance between the body and the spirit, the being and the world, and when that balance is disrupted a sickness sets in. The legend says one has to find vidarica, the holy spring, and to wash before sunrise. There are no clear directions where one can find those springs but the musicians suggest that maybe it can be found in the balance between the voices and the instrument. Music touches our hearts and resonates deep within us, and the right music can truly heal and renew.

Vidarica features colorful and lyrical music that takes different traditions into the 21st century with style, originality and sense of devotion. The choice of songs is even more interesting geographically as, besides Serbia, they encompass songs from Bosnia, Macedonia and Dalmatia (Croatia). It is pure joy to hear these songs done with such care and love. A folk song is, in its essence, an expression of the emotions wailing up from those depths. There is hardly an event or occasion in the countryside which does not find resonance in the soul of the people. Laughter, happiness, pain, sorrow, all form ingredients of these songs. They are simple, charming and full of the sincerity of emotion and the purity of feeling. Entire cultures, so to speak, are reflected in them.

The arrangements are delightful, highlighting Tadić's elegant guitar style and fine ear for detail and harmonic sophistication, as well as the gentle and delicate vocal harmonies. He squeezes every ounce of melody from a song's essence, that results in a delightful and authentic showcase that, while impressive, is never overdone. He provides the perfect backdrop for the Teofilović brothers to shine even brighter.

The group breathes new life into these songs by stripping them down to their bare bones, and then slowly and carefully rebuilding them up just as much as needed and not a layer more. "A što ti je mila kćeri" is a beautiful elegiac song with lyrics possessing a slight erotic overtone, with the brothers' so gentle and almost fragile vocal delivery. Their imaginative takes on "Rosna livada" "Gusta mi magla padnala" or "Kraj potoka, bistre vode" are beautiful in their apparent simplicity. But the bulk of the songs come from Macedonia, and credit must be given to the artists for not taking on the well known and overused popular Mac folk songs. "Navali se Šar Planina" is a shepherd's song remarkable in its musical and emotional intricacy and impact. "Oj ovčarče"is an old rural song that tells a story of shephard to whom a son was born. The shepherd is asked why he is so happy. He answers: "How could I be unhappy? My sheep lambed and many of them had twins, and my wife just gave a birth to my son."

Tadić already covered this song on Krushevo, with Vlatko Stefanovski playing a beautiful slide to cover the vocal parts. The results are warmly intimate with undeniably appealing colors. "Sedna baba da večera" is a humorous upbeat song immortalized by legendary folk singer Alexandar Sarieski, and tells a tale of a grandmother who could not satisfy her hunger nor quench her thirst, despite eating copious amounts of food, but getting drunk in the end.

Vidarica is one of those albums where nearly every small part could be singled out as contributing to the greatness of the whole. It is a musical excursion that seamlessly flows through the styles and musics of these seemingly different lands. It finds artists that have profoundly personal approaches but who share a certain deep admiration for the songs they perform, and Vidarica is a joy to behold.

About Teofilovici and Miroslav Tadic