By GLENN ASTARITA
October 1, 1999
Sign in to view read count 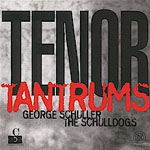 For the uninitiated, George and Ed Schuller are among the busiest modern jazz session men in the New England and New York City areas. Unwilling to rest on the laurels of their famous dad Gunther Schuller, the brothers have respectively recorded and/or performed with Tim Berne, Joe Lovano, Orange Then Blue and numerous others..... Here drummer George Schuller, along with The Schulldogs, creates modern jazz which at times leans towards the free or left-of-center end of the musical spectrum yet, in many instances swings hard and skirts the fringes of post-modern bop.

The proceedings commence with a rendition of Ornette Coleman's "Free," as trumpeter Dave Ballou along with Tony Malaby on soprano sax blaze forward with tumultuous dialogue while the consummate drummer and leader of this date George Schuller directs traffic in assiduous fashion. Accolades must be awarded to bassist Ed Schuller who will grace any project with his profound and well stated bass lines. Schuller is perhaps one of the top bassists within modern jazz circles via his deft, distinct phrasing, earthy tone and "weighty" bottom.......The medium tempo "Urwup" features strong soloing and a loose vibe, while "Tenor Tantrums" is a tempestuous, hard-boiled swing as all hell breaks loose thanks to the fierce soloing from tenor sax hero George Garzone. Mid-stream, George Schuller interjects with an appropriately timed, melodic drum solo; hence, trimming back the feverish pace a few notches. Here, brother Ed carves out some interesting arco bass passages as the band partake in conversational interplay which at times produces tension and discord as if a classical string quartet decided to run amok with a well-known toccata or playfully deconstruct a prelude to a magnificent opus.

The piano-less version of Bill Evans' "Loose Bloose" is interesting as the band coordinates phrasing and suggests harmonics, which would perhaps feign Evans' chord voicings. On this piece, the ensemble initiate a bop-funk groove featuring cunning call and response from tenorist Garzone and Tony Malaby performing on soprano sax. Trumpeter Dave Ballou utilizes his mute as he rejoins the band on the modern bop-ish "The Symptoms." Rapid flurries, efficient and well cultivated dynamics find these gents surging toward the stratosphere as the final piece, "No Hazmats," swings along in linear fashion while bordering free-jazz featuring more razor-sharp ensemble work.

Tenor Tantrums is a riveting effort from a band who have been tearing it up, predominately on the East Coast. "The Schulldogs" may be the best band you never heard, well, here's your chance. Here is a band that integrates bloodthirsty or ferocious soloing and tight ensemble work all within George Schuller's bright and modernistic compositional approach. Tenor Tantrums covers a lot of ground yet the band conveys a personalized style through at times dissimilar concepts, which can only assist with the unending or evolutionary process of jazz.