By JAKOB BAEKGAARD
August 11, 2008
Sign in to view read count 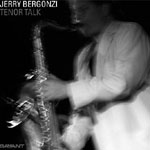 To play the tenor is to carry the load of tradition, and nobody carries this load more gracefully than Jerry Bergonzi who, like George Garzone, belongs to the category of the unsung giants of our time. However, fame or fortune does not seem to bother Bergonzi; since his shift to the label Savant, the saxophonist is in a period where he is arguably making the best music of his life.

The latest proof of Bergonzi's improvisational genius is Tenor Talk. Backed brilliantly by Dave Santoro (bass), Andrea Michelutti (drums) and Renato Chico (piano), he settles into a program of six originals and a standard.

Gershwin's "Who Cares?" heats things up from the start. Bergonzi caresses the tune with warm velvety tones, occasionally throwing in some raspy breaks, while the rest of the group keep a solid sense of swing that goes straight into the feet.

After establishing the link with the tradition of the standards, the group breaks new ground with six originals by the leader. Highlights include the smoky tribute to Hank Mobley, "Hank," where Mobley's glowing sense of the blues is conveyed truthfully.

Bergonzi's melodic compositions are the perfect vehicle for the group's interaction. Together they master all moods, from relaxed swinging and soft ballads to heated workouts. There is a wonderful sense of ease which, of course, is not easy at all.

One previous reservation about Bergonzi's playing was that it felt too intellectual. He could play so much that he almost played too much. Now, the awe-inspiring inventiveness is grounded in a bodily sense of groove that combines the head and the heart into a kind of storytelling, encompassing the great tradition of the tenor. Bergonzi is truly at a stage in his career where he doesn't need to prove anything at all. It is sufficient, to quote the title, to let the tenor do the talking.