Jerry Bergonzi: Tenor of the Times 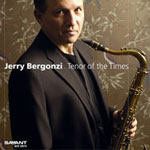 This effort from tenor saxophonist Jerry Bergonzi offers little in the way of new ideas or creativity. He seems mired in the world of John Coltrane, in many instances replicating the master's phrasing and sound. The instrumentation of the album is also the same as Coltrane's classic quartet (tenor, piano, bass, and drums). To compare the two groups would be silly, however, given that the latter unit cut its albums over four decades ago.

"You're My Everything," the only tune not composed by the leader, shows off Bergonzi's full-bodied tone, and his solo is full of rapidly executed arpeggios. The quirky-metered "Acookarache" displays Bergonzi incorporating elements of Sonny Rollins (in terms of rhythmic playfulness) and Joe Henderson (phrasing). Unfortunately, the aforementioned moments are the only real highlights to this disc.

Bergonzi's rhythm section is largely uninspired, and several tunes plod along in lackluster fashion, eschewing any sense of swing. Pianist Renato Chicco delivers largely cliche-filled solos that meander and lack any sort of excitement. There are, however, a number of competent solos from the bass of Dave Santoro, most of which are crisp pizzicato affairs. Andrea Michelutti's drumming is unassertive; it lacks the fire that could inspire the group as a whole to better results.

What I find particularly annoying is not the fact that Bergonzi is influenced by Coltrane (scores of saxophonists and jazz musicians are), but that he imitates him so closely, to the point of slavishness. If jazz is about developing one's own unique voice, Bergonzi has a long way to go, at least based on this recording.

Acookarache; You're My Everything; Bob Berg; Cadiz; Stumbelina; Skull Shining; The Tomb.