By HRAYR ATTARIAN
January 28, 2012
Sign in to view read count 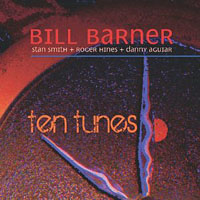 Variety is the theme of Bill Barner's plainly titled Ten Tunes. Although currently employed by a big band and small swing combos, Barner's career as reed man has spanned different genres, from free jazz and Indian raga and to bluegrass and klezmer, and the disc reflects that versatility, with the leader focusing exclusively on clarinet.

Opening with the Chicago-style, blues-rock "Opening Gambit" Stan Smith's blistering guitar work contrasts with the unique and mellow Barner, while the soulful "Wide Stance Dance" is marked by Smith's loosely swinging urban sounds and Barner's acerbic tone. Perhaps Barner's most complex improvisations are on the bop-ish and up-tempo "Squeeky Rico," where his train of thought seamlessly passes on to Smith before a repetition of the theme brings the tune to a close.

Musical traditions from other parts of the world make up a large portion of the record. The classically influenced "Barbaro" is reminiscent of art house European film soundtracks, with its nostalgic dialogue between Barner and Smith, with Roger Hines' melancholic bass work adding another emotional dimension to the piece. Hines also brings an earthy quality to the otherwise ethereal clarinet-led and Brazilian -sounding, "Charm Offensive," while his arco solo on the Middle Eastern-tinged "Connecting Dots" enhances the mysterious mood that the modal improvisations create. Here again, Smith and Barner weave a musical fairytale that could have come right out of The Arabian Nights.

Danny Aguiar's rollicking drum work is the understated driving force behind the quartet and his virtuosity shines through on the angular and somewhat fusion-like four-way conversation of "War of the Words," the atmospheric "Flying Monkeys" and the whimsically short "Toddler's Dance."

This enjoyable and always interesting session highlights the versatility of the clarinet—and also the high level musicianship of Barner and his band mates—but also breaks it free from the narrow niche to which the instrument, unfortunately, is often relegated to in modern music.