By PAUL NASER
September 7, 2019
Sign in to view read count 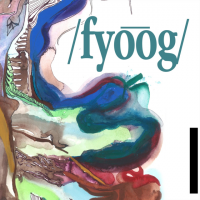 As far as band names go, /Fyo͞oɡ/ lands firmly on the side of the eccentric. As far as roots go, it hails from one of the world's most storied music cities. The New Orleans-based duo looks to both the city's past and present for its debut record, Temp'rall Sho'gazing.

As abstract and modern as /Fyo͞oɡ/'s naming practices and album artwork are, its repertoire is quite conventional. Pulling from funk, jazz, gospel, folk and blues traditions, covers on the release include "St. Louis Blues," "Sometimes I Feel Like a Motherless Child" and "Black is the Color of My True Love's Hair." These are treated to fresh takes that don't stray too far from the original spirit of the compositions.

"Motherless Child," for example, features a bowed bass and swelling organ and drum set playing that follow vocalist and co-leader Katarina Boudreaux through her emotional interpretation of the lyrics; the moody, rubato rendition stays true to the lyrics' character while showcasing the band's sound and approach to arrangement and improvisation. The closer, "T'ain't Nobody's Business," may be keyboardist and other half of /Fyo͞oɡ/, Sam Tepper's finest playing on the record and finds him right at home in soulful, bluesy territory.

The originals on Temp'rall Sho'gazing provide some of the more interesting moments of the record. Highlights include "Better" and "Nibble." "Better" is a loose and funky jam that features Tepper. His organ and piano playing here give a good feel for the energy and style that he brings to every song. "Nibble" stands out for the satisfying arrangement and groove that hold the tune together.

Temp'rall Sho'gazing is an interesting record that offers heartfelt interpretations of old covers and light-hearted yet engaging original tunes. The loose and easy feeling of the arrangements and playing is fun, yet it at times comes off as not quite properly finished. But the spirit comes through and it remains an enjoyable listen, especially for fans of blues, funk or gospel.