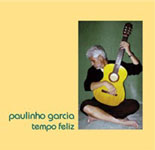 In Chicago and Japan, among other exotic places, guitarist/vocalist Paulinho Garcia is well-known and beloved as one half of the multi-recorded group "Two for Brazil" (with tenor saxophonist Greg Fishman). He's also a third of "Three for Brazil" (with Fishman and celestial Polish jazz vocalist Grazyna Auguscik) as well as the leader of his own band, Jazzmineiro.

A resident of Chicago for over two decades, the Brazilian-born Garcia brings the same distinctive sound to all of his musical configurations: his fluid, expressive voice and clean, jazzy guitar are warmly intimate and full of heart. This CD is Garcia's second solo effort and his best yet; it engages the listener from the first note, then soothes, swings and seduces until the last.

The fifteen tracks on Tempo Feliz include old favorites and lesser-knowns, jazz and Brazilian standards, and a pair of tuneful Garcia originals. Garcia covers Jobim, Baden Powell, and Edu Lobo, as well as Tadd Dameron and Irving Berlin with soul and infinite tenderness.

Listen, for example, to his take on "If You Could See Me Now" or "Eu Sei Que Vou Te Amar [I Know I'm Going to Love You]"—and especially his own "Do You Remember Me?"—each of which is likely to melt every female heart within a fifty-mile radius. Another highlight is Garcia's unique rendition of "Samba de Uma Nota So (One Note Samba)," a tune which too often sounds choppy or rushed; here, his voice floats over the rhythm, giving a whole new lilt and breathing space to the melody. .

Garcia's music is straightforward but never simple, and new subtleties emerge with every listening. Tempo Feliz is recommended for fans of Brazilian jazz and solo guitar, and those who simply want to kick back with some classy, beautiful music.