By EDWARD BLANCO
December 6, 2013
Sign in to view read count 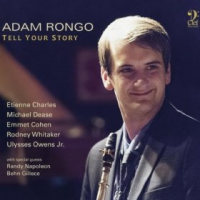 Young saxophonist Adam Rongo introduces himself to a national audience on the appropriately-titled Tell Your Story, delivering a sparkling debut of straight ahead post-bop material featuring a seasoned cast of players superbly interpreting a selection of new and exciting cover tunes—all telling a musical story that is unfolding quite nicely. Originally from Essexville, Michigan, and coming from a musical family, Rongo gravitated to the saxophone, studied in Chicago as well as at Michigan State University and learned the jazz ropes from such masters as Dick Oatts, Rob Parton, Tom Garling, Mike Smith and Diego Rivera just to name a few.

Based in New York where the saxophonist has been performing as a sideman and bandleader, Rongo has established himself as one of the rising young guns in the area's jazz scene performing with some of the finest musicians in the world. Trombonist Michael Dease and drummer Ulysses Owens, Jr. are just two of the players he has collaborated with and does so again here as part of a core quintet for this album. Eight other players appear as guests bringing the vibraphone, guitar, and baritone sax into the mix.

Having declared a personal goal of "not just to make my own music flourish, but the music of others...," Rongo draws upon the music of jazz greats like Hoagy Carmichael, Johnny Griffin, Jimmy Heath and others to light the fire beginning with Steve Wilson's "Turnin' The Corner" and continues on the following Gene De Paul classic "You Don't Know What Love Is." Wielding the alto saxophone like a wild man, Rongo performs his first of three compositions with the fast-paced "Temporary Paralysis" featuring the great Etienne Charles on trumpet, Behn Gillece on vibes and Rodney Whitaker on bass with solos of their own.

The soft piece of the set goes to the lovely Johnny Green standard "You're Mine" performed in a duet with guitarist Randy Napoleon for one of the memorable tunes of the recording. The exciting original "Doppelganger" captures the sax man's finest performance on the alto as well as featuring Emmet Cohen on excellent piano work. One of the most challenging charts of the album has to be the Dease original "Good & Terrible" showcasing some of Rongo's chops along with fine key work from pianist Miki Hayama and stellar cymbal accents from drummer Owens. The Wager is a hard-driving original falling squarely within the hard bop genre while, "Two Tees" and Carmichael's "Stardust" are traditional in texture.

The session rounds out with the title track and closes on the energetic Griffin standard "Fifty-Six" capping an attention- grabbing set of splendid jazz. Perhaps little known at this junction in his young career, saxophonist Adam Rongo has one heck of a musical tale to tell on the impressive Tell Your Story and does so with intensity, elegance and grit in delivering a gem of a debut, well done!

Turnin' The Corner; You Don't Know What Love Is; Temporary Paralysis; You're Mine; Doppelganger; Good & Terrible; The Wager; Two Tees; Stardust; Tell Your Story; Fifty-Six.