By GLENN ASTARITA
April 6, 2008
Sign in to view read count 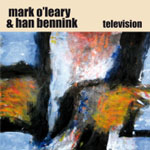 It's a proven fact that rising guitar superhero Mark O'Leary only performs with the cr?me de la cr?me of progressive-jazz improvisers. No doubt, he's on a fast-track pace via notable recordings for Leo Records and others. This 2008 endeavor marks the Irish guitarist's inaugural outing for Sweden-based Ayler Records, and it's a download-only MP3 product that offers album cover art and tray inserts. Here, O'Leary meets up with legendary Dutch drummer Han Bennink for a rough and tumble improv set that offers an impressive degree of contrasts.

O'Leary's customary volume control techniques coupled with Bennink's cymbal shadings serve as textural components. However, the duo often seizes any given moment by way of a consortium of reverse- engineering maneuvers and soaring choruses. Not necessarily a slugfest, the musicians show a deep-rooted comprehension of each other's moves and styles. And, of course, they exercise a cordial balance of sorts, where they nicely blend some muscle-flexing episodes with a few quieter moments, featuring O'Leary's delicate voicings.

At various times they morph bluesy passages into linearly executed workouts, with Bennink a multifaceted polyrhythmic machine throughout the scope of O'Leary's single-note flurries. But they deflect ideas off one another with fluid runs and cat-and-mouse exchanges. Otherwise, they tone it down some with an off- kilter, New Orleans shuffle groove highlighted on the album's closer "Nothing New." To that end, the musicians perpetuate an optimistic outlook that transcends many of the more austere endeavors of this ilk. It's quite obvious they were enjoying themselves, which is a facet that is communicated in altogether mesmeric fashion. Bennink is the elder statesman here, yet O'Leary shines as an apprentice who has come of age—even though this set was recorded back in 2001.

Visit Mark O'Leary and Han Bennin on the web.