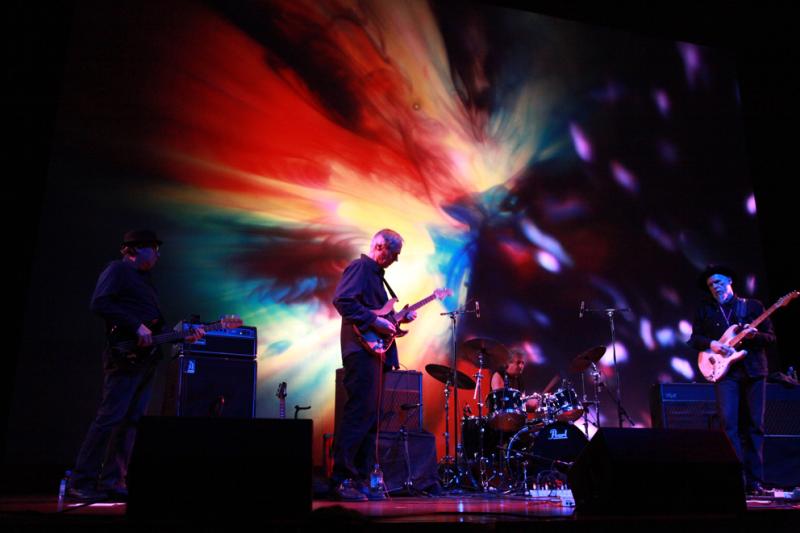 New York University's performance theatre has turned into a regular home for these Joshua Light Show mini-seasons. This was the last of three evenings where the veteran old-school psychedelic light outfit was playing host to a pair of acts each night, suitably aligned to its sense of far-out oily-liquid spectacle. Founded by New Yorker Joshua White, the JLS was a pivotal part of the late-1960s and early-70s scene at the Fillmore East, the city's prime counter-culture venue at the time. Their blobular extravaganzas pulsated around the likes of Frank Zappa, Jimi Hendrix, The Doors and The Grateful Dead. Despite the Skirball Center being more of an establishment joint, the team were still able to create their own peculiar audio-visual universe for a finite period, uniting like-minded acts in an orgy of sonic cosmo-exploration. The current crew includes illustrator Gary Panter (a serial Zappa cover artist) and Ana Matronic (famed as a Scissor Sister).

When Television strolled onstage in the semi-darkness, it soon became apparent that there were no vocal microphones in evidence. This was set to be an instrumental odyssey, as the quartet half-faced the backdrop, ready to respond to the roiling light effects, which were in themselves reacting to Television's improvisations. Though a few hitherto known tunes reared up as spectre reflections, the vibration was mostly between jamming and free-form, depending whether we employed rock or jazz terminology. Even though heavy blocks of riffage and tuneful twang poured forth, most of its sections were impromptu, with signals given from guitarist to guitarist, and then between bass and drums. The structure was being designed on the hoof.

This was an almost alien manifestation of Television, side-stepping away from their known song repertoire, even though Tom Verlaine's solo albums have frequently engaged with no-vocal landscaping. A disappointment if the punter desired the familiar repertoire, but a boon to those seeking psychedelic voyaging, with visual assistance. On each night of this season, the lighting effects had possessed a different mood, prompted by the nature of the music delivered. For this set, the images were less busy, streaked as dark-hued vistas of slow-clouding natural evolution. The large (surely larger than back in the day) crew were squirting their pipettes onto several liquid surfaces, the multiple pools being projected simultaneously through beams that were ranged across the behind-stage area. This created a three dimensional aura, as some images appeared to leap larger and closer, spangled refractions from aluminium sheets, by the look of things.

Band and lightshow coagulated into a single entity, as Television began to amass an improvisatory energy, clicking into place, and entering the outer regions of surf, flamenco and garage twang, from punk, casting back to the hallowed sounds of the 1950s and '60s. Initially, Verlaine seemed slightly reticent, leaving comparative newcomer Jimmy Rip to handle most of the more outgoing guitar solos. Around half way through, this dynamic switched, and Verlaine began to ascend, stalking forward to deliver repeated lead escalations. A particular highlight was a Spanish-tinged piece that repeatedly strafed to a staccato crescendo, seemingly finished, before loping off for another round of slow-building tension. There is humour in doomy throbbing!

J Spaceman is otherwise known as Jason Pierce, whose main outlet during recent decades has been Spiritualized, although his earlier combo was the Spacemen 3. For the evening's second performance, he was met in duo state by drummer Kid Millions (John Colpitts), a younger player whose prime outlet is now Man Forever. The mode was free improvisation, in the cosmic sense, and the visuals were probably the most extreme of the week, dominated by stellar explosions and bright streaks of fast-flooding activity. Spaceman isn't the most technically gifted of guitarists, being more of a conceptual bandleader, but he has a way with fine sonic taste, working with minimalist jangles and meaningful dredge-riffs, many of which he set on repeat, meanwhile adding to the thick layers, mounting a barricade of churning accumulation. Once this was done, he turned to the piano, striking out repeated notes that married perfectly with the chiming guitar mass. Millions was in an abstract rumble state, perhaps casting back to Elvin Jones, Ed Blackwell or maybe even John Stevens. The pair had time for a few sensitive stretches, and some completely solo passages, whilst the other partner girded their loins for the next outbreak of tumult. Ultimately, the hardcore chops weren't as impressive as those of many jazz freedom-seekers, but the duo still displayed good judgement-filtering in the power and directness of their construction work.

The new Rough Trade shop/venue in Williamsburg is a stray outpost of resistance to the steady closure of d.i.y. warehouse joints in this part of Brooklyn (Glasslands and Death By Audio are both on the way out). Even so, it's a more upmarket version of this concept, having as much in common with The Music Hall Of Williamsburg, in terms of the physical set-up of its gig-room. The frontal store makes a defiant stand amidst the ongoing shuttering of all the record-vending outlets in NYC, and indeed globally. The venue is just the right size to contain a good-sized crowd without being too voluminous. This gig was sold out, but there was still ample room to move around.

This was Moore's second Brooklyn gig in a week with this new outfit, limbering up for a European tour. Their shit was consequently well together. Sonic Youth's old drummer Steve Shelley remains on the same stool, except when he's manning the merchandise stall, hanging out with guitarist Nels Cline. This is not a combo that hides out in their dressing room. The bassist is Deb Googe, from My Bloody Valentine, and Moore's guitarist sparring partner is now the hitherto unknown James Sedwards, both of them from the UK, as Moore has lately been living in London. When the solos started to fly, Sedwards revealed a more traditionalist bent, arriving from the Neil Young encampment. Moore's tendency has always been towards an openly abstracted angularity. Around midway, Googe began to manifest an insistent pulse down in the lower reaches, coaxing out a breathless throb. On first listen, the band's debut album isn't massively arresting, but its songs sounded much better on this evening, opened up into extended freak-outs that allowed the foursome to build up an electric overload. With a substantial encore, what was expected to be a concise set ended up approaching the 90 minute mark, without any flagging of intent.

Adrian Belew has provided agile guitar work for King Crimson, Talking Heads, David Bowie and Frank Zappa, scorchingly cerebral and ballsily blasting. He's also been his own man for the three decades since, but this means that he's been more inclined to develop a songwriting side, featuring the lead vocals that were first heard by most on Crimson's early-1980s albums. Calling this band a power trio tends to suggest that guitar instrumentals will be screaming out almost without exception, but Belew's two sets were filled with mostly vocal numbers, almost all of them clocking in at punkoid length, or even shorter. With his laptopped in-between-numbers environmental snippets, the evening was given a patchwork feel, as if he was running through a triple-disc conceptual set. Much of the writing involves a degree of pastiche, whether of the starry artists he's actually worked with, or using a classic template of The Beatles, mostly. Often, the listener would mull over which familiar chestnut was being delivered, only to conclude that it was a Belew original, paying invariable rock history homage.

All this aside, most of the crowd probably came for the guitar solos, of which there many, even if curtly clipped into a few seconds of expression. For a Tuesday night, and a specialist interest player, Belew could be very pleased with the turn-out, which made the Highline appear rather populous. The second set was shorter, but more dynamic, not least because it featured more Crimson songs, peaking with "Indiscipline," with its elemental stop-start elephantine riffing, interspersed with Belew's beatnik narration, and then encoring with Zappa's "City Of Tiny Lites," an epic soul-metal comedy classic, interpreted with precision gusto by the trio, augmented by opening artist guitarist Saul Zonana. Belew has contributed to some of the best rock records ever laid down, and even this mixed pleasure of his own songs couldn't deny us the thrill of hearing his axe in full, exultant roar.