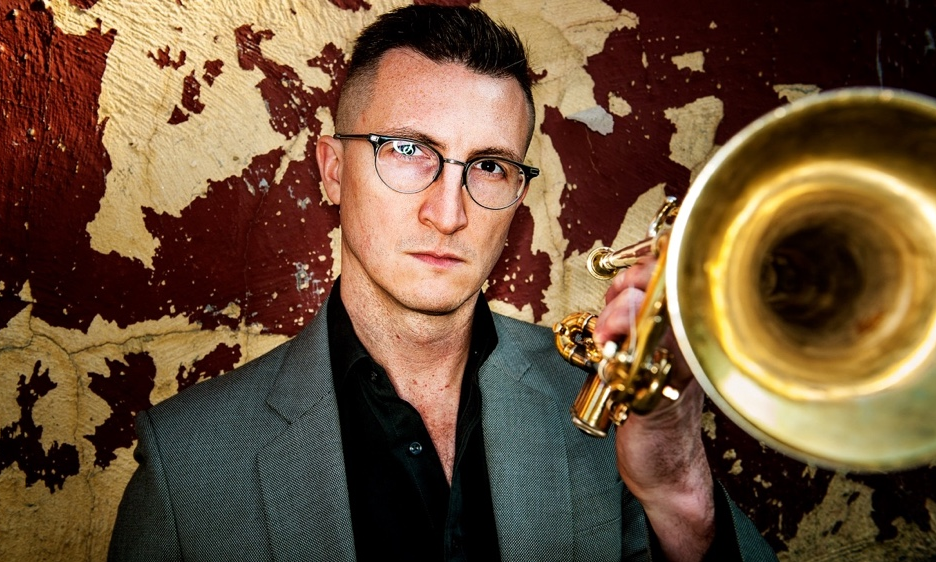 The other night I went to Trumpets Jazz Club to check out the Ted Chubb Band without any preconceptions as to what I was about to hear. I was nonetheless interested in answers to some basic questions. Knowing nothing about the trumpeter's efforts as the sole leader of a band I arrived at the club with a mental checklist. What's the set list comprised of, and how much of it is original? Can the original material stand on its own, or does it resemble a pale imitation of existing jazz and/or pop templates? Who are the sidepersons on the date and what kind of effect will they have on the music? Will Chubb organize the set in a manner that is varied and well paced, or will the performance come off as something approximating a blowing session? And, last but not least, is he able to connect with an audience in extramusical ways?

My interest in Chubb stems from a now defunct band called New Tricks, a piano-less quartet that was co-led by the trumpeter and saxophonist Mike Lee, and included bassist Kellen Harrison and drummer Shawn Baltazor. They were, in a manner of speaking, the home team that I listened to, rooted for, and sometimes wrote about. A band in the truest sense of the word, they began by woodshedding in Lee's basement studio and gradually developed a repertoire of original material. Over the course of several years New Tricks worked in New York City area clubs—including Trumpets—did a couple of tours of the mid-west and one on the west coast, and released two excellent recordings, New Tricks and Alternate Side. The band possessed an intense, slippery, interactive, bebop-to-Ornette sound, and could be counted on to deliver high energy, incendiary live shows.

Sitting in the same place at Trumpets (the bar, practically within arm's reach of the drums) where I last heard New Tricks several years ago, I listened to Chubb's group and took stock of the performance. A five selection, approximately hour-long set answered all of my questions and then some. In most respects it was a balanced, pleasurable, thoughtful production. Chubb offered four of his recently composed, relatively untested compositions, and one from Gratified Never Satisfied, his 2017 recording. The material sounded personal, well thought out, and spanned a variety of moods and rhythmic feels. A band comprised of pianist Oscar Perez, alto saxophonist Anthony Ware, bassist Tom DiCarlo, and drummer Jason Tiemann animated Chubb's charts and made the most of their individual turns as soloists. The trumpeter's improvisations were lucid, brimming with ideas and didn't stray from the character of each of his compositions. Seemingly unconcerned about playing to a near empty house, Chubb possessed a genuine mastery of stagecraft, connecting brief stories about his travels in Switzerland and India to the individual compositions, without pausing too long and diluting the strength of the music.

During a portion of Perez's solo on "SBB Bounce," the set's opener, both Chubb and Ware turned around to watch Tiemann, their faces expressionless but deep in concentration. I chose to believe they were hearing what I was hearing—that in only a few minutes the drummer was well on his way to having an exceptional night. Working in concert with Perez and DiCarlo, Tiemann challenged Chubb and Ware at every turn, particularly throughout "Expat" and "Little Sid." It was conventional swing on steroids, grabbing a hold of me and refusing to let go. I briefly flashed back to nights over four decades ago, sitting in clubs and being driven into a near frenzy by Louis Hayes, Frank Strozier, Harold Mabern and Jamil Sulieman Nasser. They generated momentum that I couldn't get enough of, that I often hoped would never end. Perez, DiCarlo and Tiemann had the same effect on me—particularly Tiemann, who pushed the band like an enlightened despot, wielding a large vocabulary of rhythms on every drum and cymbal with a single-minded purpose.

There are some things that can't be easily explained by a detached, critical perspective; jazz often engenders highly personal reactions that don't necessarily fit neatly into the things we know (or think we know) about the music. A significant portion of Ted Chubb's set was in a realm beyond words and something to be treasured in memory.