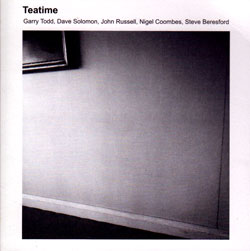 These are seminal works of European improvised music. What makes them all the more exciting is the fact that this is the one and only time that they will ever be played this way. Remembering Eric Dolphy's famous broadcast over Dutch Radio recorded on May 29, 1964, just weeks before he died, "When you hear music, after it's over it's gone in the air. You can never capture it again." the improvisations of saxophonist Garry Todd, violinist, Nigel Coombes, pianist, Steve Beresford, guitarist John Russell and percussionist Dave Solomon are just that, on Teatime. They are entrancing, daring and sublimely humorous... and fleeting. After they play the music it is gone in the air forever, never to be played—certainly not this way—ever again.

Just as the so-called avant-garde movements of New York (in the '60s) and later in Chicago as well, attempted to redefine music or extrapolate the work that Charlie Parker had begun in the '40s (bebop)—reaching back to the blues through a revolution in rhythm, the improvised music of Europe in the '70s dashed against conventional (European) concepts of harmony. The resulting idiom, as displayed by musicians such as these is vocal, hoarse because of the snorting of the saxophone, screeching of the violin, disturbing interpolations of the piano and rapid arrhythmia of the percussion. Essentially, however, the musicians attempt to dismantle even unconventional harmony, by responding almost vocally, to each other. Even when momentarily, violin and guitar find folk-like phrases in a distant sort of echo as they do during "Part 4" of "European Improvised Music Sho' 'Nuff Turns Me On" the virtually incidental, harmonious passage comes as a comment that is almost ironic. Also In "Part 4," the dénouement of the lively suite, the music is returned to its rambunctious state, ending after a sustained moan is capped by a fluttering violin and guitar figure.

One quick, ironic piece—"Deadbeat"—later the music picks up where the earlier long suite left off. The other longish work, "I Didn't Get Up This Morning" is more phantasmagorical that the other suite on this album. This one is more oblique, musically, with plenty of hidden references played on the piano that are truncated by the vigorous revelry of the tenor saxophone and the breathless shimmer of the percussion. "Graham Shows His Teeth" snarls with splendid irascibility. And "Low-fi" is another smarmy comment on the state the push and pull between artistry and industry—the "church and state" that continues to preoccupy and attract as much ironic comment as the music on this album. Once again it bears mention that the proverbial doffing of the hat goes to Martin Davidson of Emanem Records, for having the foresight to record this music when it was last performed in 1975.