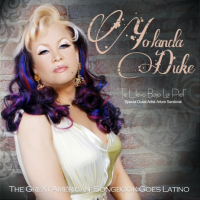 Born in the Dominican Republic but raised in New York City, Yolanda Duke is no ordinary artist. Gifted with a powerful voice and a presence on the stage, Duke has earned the reputation as the "Queen of Latin Soul." On Te Llevo Bajo La Piel (I've Got You Under My Skin), Duke comes out swinging in big band style as she reprises many of the songs found on her previous Many Moods (Amigos Music, 2008) where she sings several standards in English, backed up by The Tito Puente Orchestra. On this album, the singer makes two major changes, the music from these standards are presented in a Latin jazz style and voiced in Spanish. The result of course, is a rare treat as The Great American Songbook goes Latino transforming recognizable melodies from familiar songs into gyrating Latin rhythms delivered by the booming vocals from a sensational singer.

After recording a tribute album to Latin singer Guadalupe Victoria Yoli "La Lupe," who performed with Tito Puente for some time, the percussionist invited Duke to perform with his orchestra as a guest and eventually as a permanent member of the band for several years. Today, she carries on Puente's legacy by performing with his old band around the world. For this album, "La Duke," as she is often referred to, enlists many former members of the old Puente Orchestra and also calls upon trumpet master Arturo Sandoval as a special guest appearing on "Contigo En La Distancia" where Sandoval not only performs a trumpet solo but, also plays the piano.

Opening with loud shouts from the orchestra, La Duke's crisp vocals reaches on a terrific interpretation of the classic Errol Garner standard "Misty," then turns soulful and spicy on the Cole Porter title track "Te Llevo Bajo La Piel." The Latin beat remains strong and percussive on the other Porter standard, "Eso Que Llaman Amor (What Is This Thing Called Love)" while the Ira & George Gershwin immortal tune "Nadie Me Lo Podra Quitar (They Can't Take That Away From Me)," is one of the highlights of the disc displaying the singer's playful vocals with perhaps the best instrumental performance from the ensemble.

All of the above standards, with different interpretations, are found on her previous recordings as are the music from Rafael Hernandez ("Muchos Besos") and Myrta Silva's "Medley Myrta Silva," while the Neil Sedaka song "Extrano Aquellos Anos (The Hungry Years)" as well as the two versions of "Dios, Come Ti Amo!," are original to this album. A truly amazing performance from the Queen of Latin Soul, Yolanda Duke swings and impresses on Te Llevo Bajo La Piel making this marriage of traditional American standards with a big band Latin approach, an engaging and exciting experience worth repeated spins, very well done!