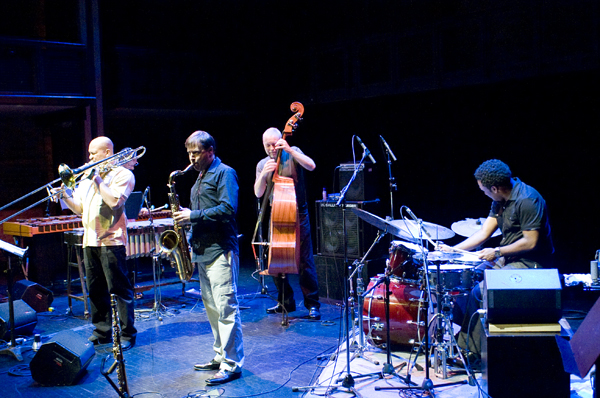 By ALAIN LONDES
July 2, 2011
Sign in to view read count
TD Toronto Jazz Festival 2011
Toronto, Canada
June 24-July 3, 2011
2011 marked the 25th anniversary for a festival that is a key stopping point for artists coming to Canada. Organizers always have to strike the right balance when booking top names and other talented international artists.

A key change from previous years was the relocation of the big white tent—housing all the Mainstage concerts—from Nathan Philips Square, in front of City Hall, to the park square located between Roy Thomson Hall and Metro Hall. More lawn area provided more comfort to check out the free afternoon shows on the adjacent stage. Venues hosting the better-known names ranged from the Enwave Theatre, near the lake, to Koerner Hall and the Sony Centre, while the Glenn Gould Studio was the spot for unique piano solo showcases by Randy Weston, Jacky Terrasson, Vijay Iyer, and Kenny Barron.

To ease into the end of the work day on this Friday afternoon, Quotes Bar and Grill was a lovely and quiet environment for some classic easy swing. The Canadian Jazz Quartet, featuring guitarist Gary Benson, vibraphonist Frank Wright, bassist Duncan Hopkins and drummer Don Vickery were joined by New York tenor saxophonist Harry Allen. With such classics as Jerome Kern's "The Way You Look Tonight," "Laura" and "Tenderly," Allen's superb technique, combined with melodic emotion and depth, was crystal clear. An intimate live setting such as this allowed the audience to relax while hanging on to every note. For balance, the group also played classics such as Billy Strayhorn's fast, bluesy ballad, "I'm Checking Out (Goom-Bye)." Three wonderful sets closed fittingly with "That's All," from the Great American Songbook.

In order to create a real street party atmosphere for this year's occasion, Aretha Franklin, the Queen of Soul, was the key headliner for a free concert. It's never easy being an opening act, but, when the lead singer with Jordan John & The Blue Angels asked the crowd if they wanted to hear one more, it was worth a little smile when the crowd answered with a resounding "No!" The large band brought together musicians who came with Franklin, as well as top locals such as Juno Award-winning trumpeter {John MacLeod and saxophonist Alex Dean. At the start of the show, the band warmed things up, before Franklin finally came onstage to the delight of an enthusiastic crowd. Recognizing the context of the festival, she selected "Cherokee" as her first song. From there it was one favorite after another. She chose not to include "Respect"—and she didn't need to, with everything that she had to offer. She delivered R&B hits including "Baby, I Love You," "(You Make Me Feel Like) A Natural Woman," and "Moody's Mood for Love," in honor of the late NEA Jazz Master James Moody. She also played piano on "Bridge Over Troubled Water," a quieter tune, before picking up the pace with what could have been a gospel revival meeting, all the way to another classic, "Freeway of Love."

The Dave Holland kicked off the Jazz By The Lake series, over at the Enwave Theatre, for an early evening show on June 25. A frequent visitor to Toronto, Holland is one of those busy musicians who has accomplished much yet continues to devote a considerable amount of time to composition for various band formations. All the members of his standard quintet bring their own technical adeptness and individuality to the whole. The quintet's Toronto performance clearly demonstrated the collective personality that fans were expecting. Holland assumed the centre of the formation, and acted as a cheerleader for his relaxed fellow musicians. A brief issue with feedback had trombonist Robin Eubanks commenting jokingly: "Hey, that's in the key of the song!"

On the post-bop "Cosmosis," Chris Potter switched from tenor saxophone to soprano, in order to push the high notes of this vibrantly swinging tune. During his solo, Eubanks added a quick Miles Davis reference that did not go unnoticed by Holland, who visibly enjoyed the trombonist's improvisational ideas. "The Sum Of All Parts" showcased the trombonist's engaging style, as well as his double voicings, used during the more intense measures.

Drummer Nate Smith exhibited impeccable timing as he navigated through varying time signatures in the same tune. On "Lucky Seven," he used shakers in his right hand, while keeping his other left hand and both feet busy without needing to pushing volume—a real clinic in itself—while the unassuming Steve Nelson brought precise flair on vibes and marimba. Such a delicate touch came out for the beautiful melodic line on the vibraphonist's "Go Fly A Kite," the quintet's fitting encore, following a well-deserved standing ovation.

For a bit of blues, the Mainstage concert featured Stax! With guitarist Steve Cropper, bassist Donald "Duck" Dunn and singer Eddie Floyd—all part of the legendary Stax label during its soul music heyday. A key point during this journey down memory lane was when Floyd brought another Stax alum, Eric Mercury, onstage to sing "Knock On Wood" and "Soul Man." "Soul Man" could have benefited from a full horn section for more depth and its familiar sound.

If a theme had to picked for Sunday evening it would have to have been world music, but in the general sense of the word, with each act different in style and substance. The most iconic performer was pianist Randy Weston who, at 85, continues to perform and educate about the origins of music and the history of jazz. The Glenn Gould Studio was a fitting venue for this intimate solo performance, with Weston making discussing his experiences with the late Ray Bryant.

Emphasizing his African heritage with the theme of movement to other lands, Weston selected Duke Ellington's "Caravan," a jazz standard composed by Puerto Rican-born trombonist Juan Tizol—establishing, as Weston explained, a link to the Caribbean and, ultimately, to Africa. His Ellington theme continued with "Chromatic Love Affair" and "Perdido," aach selection possessing its unique interpretation around the melody.

Moving through the historical journey, Weston also showcased Fats Waller and Thelonious Monk. Offering interesting tidbits of information, Weston talked about how African music is as old as Africa, how its definition of harmony emphasized the connection of souls with the universe, and how music stems from the Creator. He also referred to Thomas Wiggins (1849-1908), a visually impaired pianist who could play anything that he heard.

Weston also played some of his own compositions, including "Berkshire Blues" and a beautiful rendition of the lyrical "Little Niles." The performance ended on a distinctive contemplative tone, as attendees left inspired and relaxed after this unique opportunity to witness a jazz legend.

Moving onto the Mainstage Concert, Dubmatix kicked things off with a good dose of predominantly reggae and dub. The group then gave way to the 13-piece collective and two-time Grammy Award-winning Spanish Harlem Orchestra. Quite a few local Latin jazz musicians were in the house to enjoy a show, which included material from the group's recent CD, Viva la Tradicón (Concord, 2010), such as the cha-cha-laced "Como Baila Mi Mulata," and "La Salsa Dura," a perfect example of how the band combines strong horn lines for its two trumpeters, two trombonist and one baritone saxophonist/flautist, together with its three vocalists.

For this performance, vocalist Herman Olivera— the lead singer of the Eddie Palmieri Orchestra—replaced Ray De La Paz, who could not make the gig, and fit right in, featured on Celia Cruz's classic "Ahora Si." In the middle of the set, to the orchestra gave the vocalists a rest with Oscar Hernandez's "Rumba Urbana," also providing a solo spot for the pianist/bandleader. Mitch Frohman—a sax and flute veteran of 25 years with the great Tito Puente—was very impressive in the horn section and as a soloist. Some cool salsa moves were also seen on the makeshift dance floor, and the audience was on its feet for the climactic ending, with veteran Toronto percussionist Luis Orbegoso—who has played and recorded with many artists including the Spanish Harlem Orchestra—joining the group onstage.