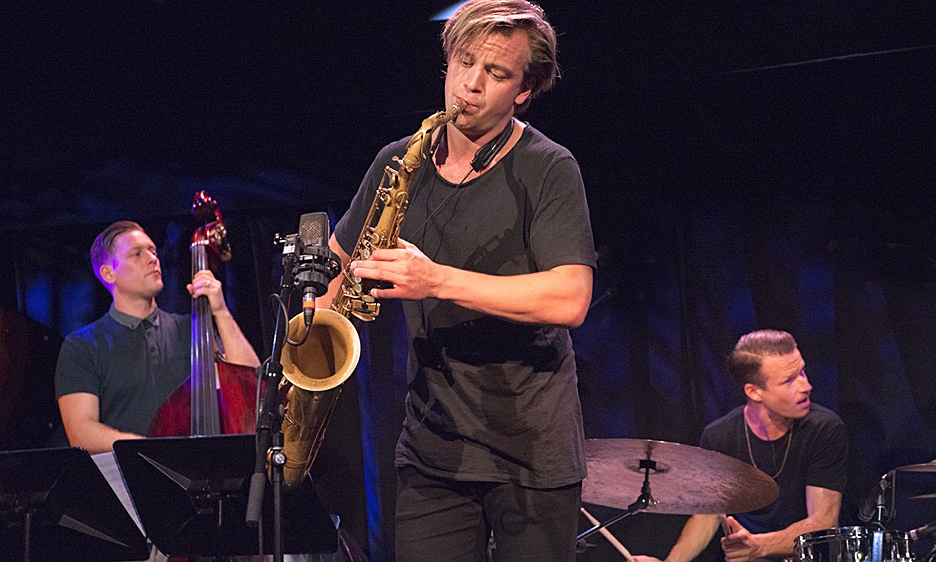 First, Confederation Park, which has traditionally been the location of its large, outdoor venue, a food court and number of shops where attendees can pick up CDs of the artist they just saw, T-Shirts and more, is currently under renovation and, therefore, was unavailable to the festival. The good news was that Marion Dewar Plaza, located literally across the street from Confederation Park and part of the City Hall complex, was available. Having been used by the Ottawa Blues Fest for quite a few years before relocating means that there was a different park configuration, but one that definitely worked.

After major external renovations made accessing the National Arts Centre, where the festival has used often used the 1,100 seat Theatre, 350-seat Studio and 180-seat, club-like Fourth Stage, the arts venue is now undergoing significant internal renovations, specifically making acoustic upgrades to most venues that, after 51 years, are in serious need of modernizing. With only the Fourth Stage available, the festival relocated a number of shows to the nearby First Baptist Church, a lovely hall with warm acoustics.

Beyond logistical issues, however, the festival has put together yet another stellar lineup for its 11-day run from June 21 to July 1. Big name, big ticket (but still, compared to other festivals, very reasonably priced) performers at the main stage included a range of jazz music and beyond, from smooth jazz trumpeter Chris Botti, singers Boz Scaggs, Dee Dee Bridgewater, Alison Krauss and Chaka Khan to newgrass/jamband Bela Fleck and the Flecktones (bringing back its original lineup with pianist/harmonicist Howard Levy), the Spanish Harlem Orchestra, DIY jazz-meets R&B group Lake Street Dive and, making another festival appearance, the great Herbie Hancock.

On the same stage, but before the 8:30 main acts, will be the festival's regular Canadian Jazz series, this year featuring artists including drummer Jim Doxas, trumpeter Joe Sullivan and his big band, Ernesto Cervini, the Heavyweight Brass Band, pianist Francois Bourassa, Ottawa-based The Commotions and, after a week of intensive workshops by many of the festival's artists, a performance by the TD Jazz Youth Summit.

The Tartan Home Stage was the place to catch rising star trumpeter/vocalist Bria Skonberg, local singer Kellylee Evans with festival Programming Manager/multi-instrumentalist Petr Cancura, Finnish accordion master Kimmo Pohjonen, Tanya Tagaq featuring Norwegian star, singer Mari Boine (who will present her own show at the First Baptist Church), bluegrass dobro whiz Jerry Douglas and his killer sepet; German National Youth Jazz Orchestra and many others, performing shows in the early evening and, with different shows on at 10:30pm, expanding the festival's reach but creating even more competition as to who to choose. Always a challenge, but an even bigger one this year.

With the Tartan Homes Stage handling the late night events, this year's OLG stage was home to a series of free concerts under the moniker OLG Ontario Series. This series of eight free concerts featured a number of up-and-coming and established artists from the festival's home province, and was a terrific way for those on a budget to catch some great music.

July 1, Canada Day, which has traditionally become the festival's final day, must program a day of entirely free, entirely Canadian content (due to federal regulations). This year, six shows, beginning at 1:00PM and ending at 7:00PM, will feature groups including Ottawa's own Souljazz Orchestra, Bank Street Bonbons, Montreal's Saxsyndrum, keyboardist Anomalie, pop/rap/funk unit Random Recipe and another show from the TD Jazz Youth Summit, this time also with the Stingray Rising Stars. And that's only a sampling of the music brought to the festival this year; if not the largest, then certainly amongst the largest and most diverse it's offered in its near-forty years.

And that doesn't include the popular late-night jam sessions at the close-by Lord Elgin Hotel, starting at 10:30PM and going to, well, whenever, where two of the city's most renowned local artists, bassist John Geggie and Roddy Ellias, held court alongside Toronto-based (but Ottawa-raised) drummer Nick Fraser, with the hopes that some of the artists performing elsewhere each evening would feel the urge to keep playing after their shows were over. There have been some years where the jam sessions have, in some ways, eclipsed main shows with the excitement and energy of seeing artists known and on-the-way-up collaborating without a safety net.

He's a veteran of the music scene since first appearing as a member of another major hitmaker's band, Steve Miller, on three of the fellow Texan guitarist/vocalist's early studio albums: 1968's Children of the Future and Sailor, and 1970's aptly titled Number 5, all on Capitol Records. With a perfect, warm and largely clear-skied summer's evening on its second day, the TD Ottawa Jazz Festival couldn't have made a better or more appropriate choice with Boz Scaggs, who's first appearance at the festival was as smooth, slick and soulful as has come to be expected from the Ohio-born, Texas-raised guitarist/vocalist.

Scaggs delivered a perfectly paced hundred-minute show (including encores) to a large crowd at the Top Shelf Main Stage in Marion Dewar Plaza, drawing upon material from across his nearly 50-year career as a solo artist. Well, his career as a solo artist actually extends beyond 50 years, with Scaggs' first album under his own name, Boz, released by Polydor Records in 1965. Still, it was only with the release of Boz Scaggs (Atlantic, 1969)—the first in a series of albums that received critical and (increasing) commercial success—that people began to take real notice of this blue-eyed white soul singer.

With a new self-produced album, Out of the Blues (Concord), on the horizon with a July 27, 2018 release date, Scaggs performed its closing track, the slowly shuffling 12/8 blues "The Feeling is Gone," as well a rocking, roots-driven version of rockabilly songwriter John Martin's "Cadillac Walk" and Scaggs' own album-opener, the more soulful "Gone Baby Gone," from his 2013 return to form, Memphis (429 Records).

Scaggs clearly knew what his audience came for, even if he included a few unusual/rare choices from his career, including the soft ballad "Look What You've Done to Me," co-penned with David Foster for James Bridges' 1980 film, Urban Cowboy, and the buoyant "Drowning in the Sea of Love," from Steely Dan keyboardist/vocalist Donald Fagen's occasional gigging band of fellow mega-stars, the New York Rock & Soul Revue, and its Live at the Beacon (Giant, 1991). Chuck Berry's follow-up to his final top ten hit of the '60s, "You Never Can Tell" (revived with its inclusion in the famous dance contest scene of Quentin Tarantino's early hit film, 1994's Pulp Fiction), may be a song Scaggs has yet to record, but it's a regular inclusion in recent set lists and appeared here in what was to be the last of three encores.

But more about that later. With a full half dozen songs culled from Silk Degrees (Columbia, 1976)—his biggest-selling album ever, hitting #2 in the Billboard 200, certified platinum five times by the RIAA (Recording Industry Association of America), with four singles—Scaggs gave the audience exactly what it wanted. In a rare instance where making any significant changes to the arrangements would have been a bad idea, Scaggs largely stuck to script. Still, with a burnished, butter-melting voice still surprisingly strong for a singer who'd just turned 74 earlier this month, and arrangements so good they simply didn't need updating, this was a rare case where straying little from form was the right decision. From the disco-fied "Lowdown," up-tempo pop of "Georgia," soulful ballad "Harbor Lights," bright-tempo'd "It's Over," set-closing (and sole Top 40 hit for Scaggs) "Lido Shuffle" and groove-heavy (though, what song from Scaggs' 100-minute performance wasn't?) "What Can I Say," the first of three planned encores, made crystal clear just how well Scaggs knew his fan base.

Even so, with those songs spread throughout the set and encores, Scaggs must have been happy with both the performance and the capacity crowd's enthusiastic response, coming back for a fourth, unexpected encore, "Breakdown Dead Ahead," the second track from his platinum 1980 album, Middle Man (Columbia). With a similar groove and tempo to "Lido Shuffle," it was, nevertheless, no retread, and sent the crowd home on a positive note.

While Scaggs did, indeed, largely stick to script, opening the set with the mellow funk of Middle Man's "Jojo," he also gave his sextet of veteran touring/session players room to move and shine. And it was a stellar group. Guitarist Mike Miller (Chick Corea, Yellowjackets, Quincy Jones) brought the perfect mix of tasteful tone, rock-edge and occasional jazz chops, with some particularly sweet and gritty work during his extended solo on the expanded "Loan Me a Dime," from 1969's Boz Scaggs, which may have been the show's second encore but turned out to be one of the best songs of the set.