By JIM SANTELLA
December 1, 2001
Sign in to view read count 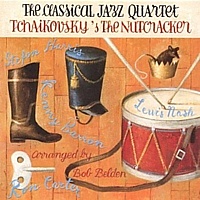 Like the Modern Jazz Quartet, the foursome on this new release folds visions of great classical music into a mainstream jazz setting. Tchaikovsky's 1892 ballet has always provided special holiday vibes for the holidays. This year, Bob Belden's musical arrangements have put a new spin on it; still leaving a lot of space for veteran improvisation. The quartet swings.

Stefon Harris, 28, received his master's degree in jazz performance from the Manhattan School of Music in 1997. Strongly influenced by the music of Igor Stravinsky, the vibraphonist balances melody, harmony and rhythm on his instrument with an easy-going, fluid technique. Veteran pianist Kenny Barron has had a great deal of success in the past 10 years or so working with widely different artists; as have Ron Carter and Lewis Nash. Coming together for this interpretation, the quartet conjures up marching soldiers, relaxed dancers, a gentle waltz, and folk idioms from around the world. With each of the four participating equally, the quartet gets its unique character from all directions. Highly recommended, this one comes just in time for the holidays.