By WOODROW WILKINS
November 23, 2007
Sign in to view read count 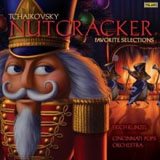 In time for the holiday seasons, Erich Kunzel and the Cincinnati Pops Orchestra are revisiting a classic with Tchaikovsky: Nutcracker - Favorite Selections. The CD provides nearly an hour and fifteen minutes of music from the popular ballet.

Kunzel's accomplishments are many. The conductor's achievements include the 2006 National Medal of Arts, presented by President and Mrs. Bush; and four consecutive years as Billboard magazine's Crossover Classical Artist of the Year.

Kunzel and the Cincinnati Pops give expert treatment to Tchaikovsky's compositions, refreshing the story of The Nutcracker. For the benefit of those who haven't seen the ballet or just haven't seen it in a long time, the liner notes include a summary of events—from the family party, to the battle between the mice and the toy soldiers, to the magical journey and the tributes.

All of the song favorites are presented, including "Overture, "March, the sequence of themed dances, "Waltz of the Flowers and "Dance of the Sugar-Plum Fairy. The music is faithful to the compositions, but with subtle changes here and there, varying mostly in tempo and amplitude.

The Cincinnati Children's Choir, directed by Robyn Lana, joins for the elegant "Waltz of the Snowflakes. Julie Spangler plays the celesta on "Variation II: Dance of the Sugar-Plum Fairy.

Throughout, Kunzel and the orchestra are brilliant. A few stand-out selections are "Mother Gigone and Her Little Clowns and the always wonderful "Waltz of the Flowers. This music is always good; Kunzel and the Cincinnati Pops Orchestra do an excellent job of keeping the spirit of "The Nutcracker alive.