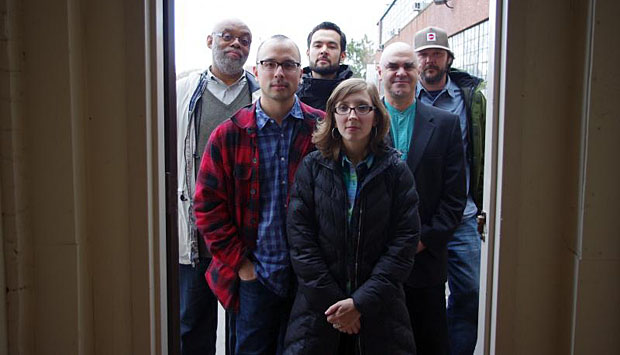 Taylor Ho Bynum cuts to a cornet's chase with his declaration of intent, in the liner notes to Apparent Distance, a 2010 New Jazz Works commission grant from Chamber Music America and the Doris Duke Charitable Foundation:

"My goal," he writes, "is not just to blur the lines between composition and improvisation (a long-time pursuit), but to try to upend the listeners' expectations in other ways: circular melodies without beginnings or ends, disguised unisons and non-repetitive vamps, transitions that are simultaneously jarring and organic. Most importantly, I want to spotlight the striking individuality and virtuosity of all the players, albeit in a context where the needs of the ensemble reign supreme—a concerto for sextet, if you will."

The best description of how sound is wrung from these instruments might be "thrushing,"' with sound flowing like a Hermit Thrush song.

It makes an aesthetic of blurring—not merely at the philosophical level to which Bynum alludes, but in the very sinews of the work. It's embedded and all the participants rise to the occasion with their applications of it.

It's one of the more exciting and possibly defining features of what this artist cohort aspires to, free to be free as birds, literally. Notation attempts would probably induce migraines and personality disintegration.

"Part I: Shift" is the shortest segment, opening with solo cornet followed by a lung- driven union with alto saxophonist Jim Hobbs and bass trombonist Bill Lowe for the second roughly equal part. It suggests the shadow of a fanfare that a trumpeter swan might cast forth. A focused frenzy, redolent of spring peepers on overdrive, also rises. At midpoint, Hobbs and Lowe join in and asymmetric polyphony ensues; a vining twining that converges with a closing unison.

"Part II: Strike" is a different kind of striking. The transition opens with the other end of the ensemble, the plucky element, and in the topsy-turviness of it all, the piece conjures aspects of wind and rain as bassist Ken Filiano makes a punctuating turbine propulsion of this motion. Guitarist Mary Halvorson covers the gusting as Hobbs handles eddies and wayward wind curls. Both deftly wrest the improbable from their instruments and vie to see which can more readily mimic or reflect the timbral capacities of the other. It's that blurring thing. Meanwhile, drummer Tomas Fujiwara is all manner of rain, from sprinkles to downpours and the crackling of every kind of fire, while Lowe indicates a shift after the ensemble pause with a summoning sort of tuba solo; no one does elephantine quite like Lowe. The elephant invocation has been around for awhile, and Lowe keeps it intrinsic (he has whales covered too).

"Part III: Source" is true to its designation, marked by a resumption of more familiar chamber music interplay. The effect is interesting as if a sonic walk that began with the riparian liquidity of "Part I" traversed meadows and glades in "Part II" to arrive at a clearing by "Part III," where a cozier sense of home is found. Here is where more recognizable facets of chamber music can be found, generally wrapped with jazz drapery.

This is also the place where each participant rises from the swirl to share their sonic lore at that moment, time's testimony. Multifaceted mimicry's of nightingale and mockingbird abound.

Halvorson launches with a glimpse of pretty guitarisms to lure the ear, and then it promptly melts into a multicolored puddle. It coalesces now and then, like some reminder, and a layered rising of the ensemble commences, first with Fujiwara's understated subtleties, bits of bass laying low and the advent of the Bynum cornet. Next thing you know, it's Lowe...and there goes Filiano at the bow. This happens more as a kind of emphasis shift, as eyes pick out a gold finch in a thicket.

The exception is a sliver of silence before Hobbs' rising, where he uses the occasion to extend the potentials of ululation to places no one else has thought to take them. The notion of solo gets its blurring too, as there is always something going on during these interludes, out of which someone rises. Another sliver of silence marks the appearance of ensemble playing redolent of a prior pinnacle period for writing: the '60s work of George Russell and Eric Dolphy.

"Part IV: Layer" has some churning stratifications, with a marching drum punctuating long tone sobs smeared six ways to Sunday. A trio unit of plucked and tapped takes turns, with a trio unit of the breathe borne for covering the framing. While one attends to the framing, the other ranges far and wide. It's a miniature murmuration.

Apparent Distanceis a benchmark for methods that seek to move past the more recognizable conventions of the idiom. Efforts to incorporate sound craft, hewing close to nature sound metaphors, have rarely been this vivid. 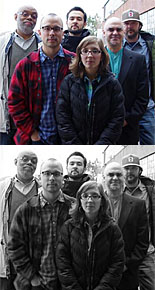