By Dan McClenaghan
May 6, 2008
Sign in to view read count 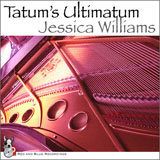 Rule Number 1 of writing a music review: try to be at least half as creative and spontaneous as the music at hand. Rule Number 2: If it's Jessica Williams' music you're writing about, good luck with Rule Number 1.

Pianist Jessica Williams is another one of those jazz artists who hasn't received the acclaim she deserves. With forty years of professional playing and fifty albums to her credit, she doesn't boast a top-of-the-line profile of the Keith Jarrett or Herbie Hancock or Chick Corea variety. Maybe it's because she never played with Miles Davis. Players got launched out of those bands. Maybe it's geographical—she's been west coast-based since 1977. Maybe it's a "woman in a man's world" thing.

But the why of it doesn't really matter. The music matters, and the music that Williams, after a long career, has made in this century (to slice a nice chunk off the ongoing effort) puts her in the top level of jazz pianists. Her Live at Yoshi's, Volume 1 (MaxJazz, 2004) and Songs for A New Century (Origin Records, 2008) showcase an artist blossoming into her prime in terms of artistic self assurance, spontaneity and the pure joy of creating beautiful sounds.

Which brings us to Tatum's Ultimatum, Williams solo piano tribute to the great Art Tatum. Tatum (1909-1956) was a technically brilliant pianist who took, in part, Fats Waller's stride foundation and ran with it, spruced it up and added a million fast notes and a bunch of exuberance. His art was joyous, flashy and full of life. And Jessica Williams takes his stylistic approach and runs with it.

Williams doesn't copy Tatum, but she gets into his spirit, and sounds as if she's having the time of her life on a bunch of tunes that Tatum played, including Sidney Bechet's "Petite Fleur," Gershwin's "Embraceable You," "Can't Get Started," and "Easy Living." She, like Tatum, can play fast, exploding with right hand bursts of bird song notes, each key touch clear and clean and separate, even at ninety miles per hour. There is, always, a twinkle-in-the-eye elegance to her approach that she roots firmly in a tradition and shades with her own colorful musicality.

Williams has positioned herself in the top level of current jazz pianists and, with discs like Songs for a New Century and Tatum's Ultimatum, she has established herself as the top solo pianist working today.

Gone with the Wind; Can't Get Started; Petite Fleur; I Never Knew; Embraceable You; Begin the Beguine; Ballad for Art Tatum; Squeeze Me; Easy Livin'; Drivin' Me Crazy; Ain't She Sweet.