By WOODROW WILKINS
April 5, 2007
Sign in to view read count 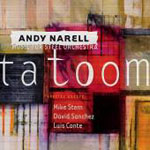 The steel pan, sometimes referred to as the steel drum or oil drum, is almost synonymous with Latin music. However, one artist has taken the instrument into another realm. For almost thirty years, Andy Narell has been a world force, not only playing jazz with the pans but also writing jazz for this instrument.

Over the course of his career, he has been a bandleader, partnered with vibraphonist Dave Samuels for the Caribbean Jazz Project, toured and recorded as a member of the quartet Sakesho, and he has appeared as a guest on recordings by Spyro Gyra. In 2004, he led Calypsociation, a 30-piece pan orchestra based in Paris, for the recording of The Passage (Heads Up).

With a small ensemble featuring percussionist Luis Conte, and drummers Mark Walker and Jean Phillippe Fanfant, Narell takes the listener on a journey of Caribbean-influenced elegance with Tatoom: Music for Steel Orchestra. The opening track, "Izo's Mood, is a twelve-minute selection that highlights Narell's versatility on the pans, while giving Walker plenty of room to mix it up, skillfully striking the snare on odd counts. Conte's work on the congas sets the mood for the almost fourteen-minute title song. A few minutes into this, he steps aside while Narell and Walker perform a duet that sounds like a much larger ensemble. Narell layers the different sets of pans beautifully, so that one gets the sense of a large steel orchestra.

Guitarist Mike Stern appears on two of the six tracks, "Baby Steps and "Blue Mazooka, adding his unique style of making a guitar sound like — well, words to describe his sound are difficult to come by. It's as though he's playing in real time, but the sound comes back as if an old record were spinning a few revolutions shy of forty-five per minute. David Sanchez offers his tenor sax for "Tabanca. Fanfant mixes some rim shots in with his playing of the toms, snare and cymbals. Narell adds the "iron, an assortment of brake drums and cowbells. The combination gives this charming ballad a bit of a Getz/Jobim feel.

Tatoom was recorded in various locations around the world, including Paris, New York, Boston, Los Angeles, San Mateo, Calif., and Hattiesburg, Miss. Unlike The Passage, in which Narell recorded thirty pan players live, the new album was recorded one song at a time, starting with the drums, congas and percussions, then all the pans and, finally, the soloists. It all comes together seamlessly for one brilliantly orchestrated album.