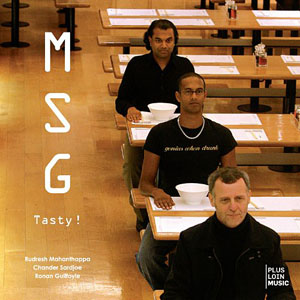 Jazz recordings cannot punch listeners in the nose—well, not literally. But when a recording hits as hard as MSG's Tasty!, it certainly feels like it.

Saxophonist Rudresh Mahanthappa, a Guggenheim Fellow and distinguished Player, has been applying his punchy style, first in projects with pianist Vijay Iyer, but lately in creative endeavors such as Apex, with saxophonist Bunky Green and pianist Jason Moran, in duo with saxophonist Steve Lehman, and with his South Asian-influenced work in Indo-Pak Coalition and The Dakshina Ensemble. Here, he teams up with Paris-based Indo-Dutch drummer Chander Sardjoe, and Irish bassist Ronan Guilfoyle.

All three players are well-versed in the music of South India, but this session comes more from Brooklyn than it does Bangalore. The playing is gritty, raw and confrontational, with Mahanthappa's music best described as equal parts Jackie McLean and Steve Coleman; Blue Note hard bop of the 1960s infused with an M-BASE dynamic.

Recorded in 2006 by this trio, a year after forming, the players exhibit a chemistry normally attributable to much longer association. The compositions—five by Mahanthappa, and three from Guilfoyle—all require the players to turn on a dime, shifting rhythms and patterns quickly. Guilfoyle's acoustic bass looms large throughout, but he hovers over "Installation," poking and propelling both Mahanthappa and Sardjoe before taking a solo of his own. Manathappa is spot on with the time changes here and on the other tricky tracks, like the very slick swing of "Traditional" or the insistence of "Sucking Stones," with its intricate harmony and changing measures. Inside the track, the saxophonist seems to step aside and play something beautiful, as if he has found a flower growing in the middle of a busy freeway. Same for "Chant," where he draws more on classical Indian music than jazz, displaying his romantic side. Then it is off to the races on "Waltz for the Anatomically Correct," MSG clearly out to win any battle of the bands.