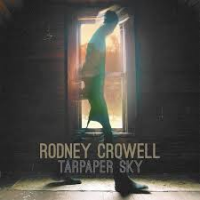 Tarpaper Sky reaffirms Rodney Crowell's position as one of the most literate of contemporary songwriters. At the same time, it exhibits his unusual savvy as a musician and bandleader as he collects a core quintet to skillfully elicit both the intelligence and emotion of his original material.

In its prolonged gestation before and after other projects- Kin (Vanguard, 2012) his collaboration with novelist Mary Karr and his reunion with Emmylou Harris Old Yellow Moon (Nonesuch, 2013)—Crowell's fourteenth album features him and the participating musicians wholly in the moment on tracks such as "The Long Journey Home." The vivid images of his lyrics find accurate reflection in the author's keening vocal delivery not to mention the economical accompaniment that adorns such songs. On "Fever on the Bayou," a singsong quality combined with the Southern genealogy imparts a distinctly country air, but the pithy fiddle avoids novelty in favor of authenticity of the region to which Crowell and company pay homage. And Will Kimbrough's accordion and counterpoint singing sound like nothing so much as a blissful moment of spontaneous inspiration.

Rodney Crowell's ability to relish the abandon of rockin' in the form of "Frankie Please" does nothing to undermine his innate eloquence as captured in the quiet of "God I'm Missing You." Like many of these eleven tracks, this one could stand on its own as a solo acoustic piece, but the details it's afforded here, in the form of equally bright electric guitar and piano, only heighten its emotional resonance. And Crowell's command of the English language extends to an expression of humor, albeit only a slight undercurrent of it, in "Famous Last Words of a Fool in Love;" It's a testament to his emotional balance that such expression of endless optimism comes through even in a subtle recognition of mortality in "Oh What a Beautiful World."

It should come as no surprise, then, that Crowell has an abiding affinity for the blues that allows him to lead the band through the modified shuffle of "Somebody's Shadow." Arrangements such as that of "Grandma Loved That Old Man" mirror his artful inclusion of details that , in the case of this cut, bespeak a tenderness arising from fond remembrance as well as the author's long- term experience as composer, player and producer dating back to the Seventies.

It's also a measure of the wisdom in Rodney Crowell's world view that he can credibly write a song titled "Jesus Talk to Mama" and juxtapose reference to the devil with distinctly gospel harmony singing, not to mention a quick tease of Chuck Berry's "Memphis" guitar. "I Wouldn't Be Me Without You" might sound glib via its title alone, but rendered with a perfect simplicity as it is here (particularly in Crowell's precisely elocuted vocal phrasing), it sounds like one of those songs born full and complete in one thought, then recorded with an identical flow of inspired purpose. The same might be said of >em>Tarpaper Sky as a whole.

The Long Journey Home; Fever On The Bayou; Frankie Please; God I'm Missing You; Famous Last Words of A Fool In Love;Somebody's Shadow; Grandma Loved That Old Man; Jesus Talk To Mama; I Wouldn't Be Me Without You; The Flyboy & The Kid; Oh What A Beautiful World