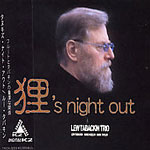 Lew Tabackin is in terrific form throughout this November 2001 trio concert from Studio F in Kasahara in the Gifu Prefecture of Japan, a recurring fall concert for the saxophonist/flutist since 1996.

Joined by bassist Boris Kozlov and drummer Mark Taylor, Tabackin begins on flute with a decidedly Far Eastern approach to John Coltrane's "Wise One. Tabackin's loping "Desert Lady has more of a Middle Eastern sound, suggesting a lonely walk and his haunting, unaccompanied two-minute cadenza is not to be missed. Another original, "Dancing Maja, has a Spanish flavor, with Kozlov alternating between arco and pizzicato lines and Taylor playing castanets.

The leader switches to tenor sax for his eerie title track, opening with an abstract figure before evolving into a playful post bop line with Taylor in the forefront. "Studio F is a bit more gritty and free than usual for Tabackin, but this self-described "free bop piece may open the ears of those who have overlooked his considerable contributions on tenor. The two encores include a lengthy, spirited exploration of "Body and Soul and a brisk interpretation of Thelonious Monk's "Rhythm-a-Ning. Recorded with a single room mic and no bass amp, the sound of this performance proves incredibly intimate.