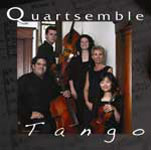 Tango, as a musical form, originated during the late 19th century in Argentina and Uruguay among European immigrant populations. It derived its unique rhythms and sound from several different kinds of European dance music, including polkas, mazurkas, and flamenco, as well as Latin American musical styles like milonga and habanera. It is traditionally played by groups consisting of two violins, a piano, a double-bass, and two bandoneóns (a free reed instrument resembling an accordion or concertina, although unlike an accordion it does not have a keyboard).

Tango, the album, was recorded in 2007 in Rochester, NY by Quartsemble, a classical string quintet consisting of two violins, a viola, a cello, and a double-bass. While Quartsemble is hardly the first to perform tango music in a classical milieu (the great baritone, Jorge Chaminé is probably the first, in his collaboration with bandoneónist Olivier Manoury), its approach is remarkable in that it combines the vibrant colors of this Latin American genre with the more autumnal shades of a European string ensemble.

Tango succeeds primarily because of this contrast, and because of the extremely high level of musicianship the individual members of Quartsemble bring to the album. Violinists Karine Stone and An-Chi Angel OuYang are electrifying, as they soar above the pulsating rhythm created by bassist Gaelen McCormick on the opening track, "Primavera Portena," composed by tango legend Astor Piazzolla. Cellist Diego Garcia and violist Marc Anderson perform intricate counterpoint that enhances the overall beauty of the whole without being obtrusive, also playing arresting lead parts. At times, the whole group seems to breathe as one, with McCormick's bass serving as its beating heart. The effect is exhilarating.

The selections are satisfying, even for those listeners who are unfamiliar with tango music beyond what they've heard in the movies or on Saturday morning cartoons. Gerardo Matos Rodriguez's "La Cumparsita" is the melody everyone thinks of when the tango is mentioned (it's difficult not to think of Jack Lemmon, in drag, dancing to "La Cumparsita" in the 1959 film Some Like It Hot).

Hearing these familiar tunes played in such a relatively unfamiliar way is a novel effect, but Tango succeeds far beyond mere novelty. It is a mature musical statement, particularly for a debut recording. These are musicians of an extremely high caliber, although it is hardly surprising that such fine musicians are to be found in Rochester, New York, home of the Eastman School of Music. Tango is a highly recommended album, and Quartsemble is a group to watch for in the future.