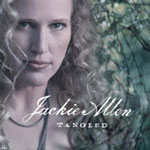 It's certainly a highly-competitive field, but among female jazz vocalists, Jackie Allen rises to the top in the Midwest/Chicago area. Her move to a major label on this, her debut for Blue Note, is well-deserved, assuring her of top-notch production values as well as assistance with promotion and distribution. And apparently she remains free to choose what she wants to sing.

This is Allen's eighth recording project, and for various artistic and commercial reasons she's been moving closer to the pop mainstream with each new album. There are some jazz influences—the inclusion of two Rodgers and Hart standards, a Johnny Mandell gem, and one tune with a fairly "straight-ahead" jazz feel: Donald Fagen's "Do Wrong Shoes." Otherwise, the present collection qualifies as eclectic and genre-resistant. Besides the jazz traces, there's plenty of contemporary pop, some exotic Brazilian rhythms, undeniable folk/ country echoes, and a bit of light rock. Allen's attraction to the sound of acoustic guitar appears to be influencing her direction in the past 5-10 years, taking her further away from the American Songbook, jazz standards, and hip swinging interpretations.

Rodgers and Hart's "You're Nearer" receives an open and honest reading with plainer, simpler chordal textures than those of, say, Shirley Horn's performance (Here's To Life, Verve, 1992)—but with Allen's unmistakable sincerity and disarming vocal quality, it would work in any setting. The real "misfire" is the same composing team's delightfully mordant "Everything I've Got Belongs to You," which requires a two- faced, innocent/dangerous femme fatale persona like Blossom Dearie's (not the cold-blooded sadist of Allen's chilling, deadly earnest reading) as well as listeners who don't have a tin ear for irony (admittedly harder to find these days).

The Islamic prohibitions against the inappropriate use of God's name may make more sense after hearing the opener, Van Morrison's "When Will I Ever Learn." Notwithstanding fans of contemporary Christian pop, the invocation of divinity works only with Berlin's "God Bless America" (thank God Irving didn't title it "God Blesses America," or it, too, would belong on the prohibited list). The program's highlight is Allen's performance of Johnny Mandell's compelling "Solitary Moon," taken in a lilting and evocative 6/8. (Hopefully someone has called the vocalist's attention to the same composer's scandalously under-recorded ballad, "The Shining Sea," with lyrics by Peggy Lee, whose reference to "brown hands" usually gets self-censored.)

The examples of singers like Tierney Sutton and Karrin Allyson demonstrate that going it as a female jazz singer these days is grueling (for one thing, try finding and keeping fully employed a piano trio) but not impossible. Hearing Jackie Allen do "Spain" (Men in My Life ), moreover, is enough to make you believe she'd have a good shot, providing the desire, perseverance, and energy are still there. The evidence on this recording, especially "Solitary Moon," attests to the enduring presence of her talent—as well as that intimate, inimitable vocal quality, more glowing, vibrant and inviting than ever.

When Will I Ever Learn; Coal Grey Eye; You're Nearer ; If I Had; Tangled; Slip; You'll Never Learn; Everything I've Got Belongs To You; Hot Stone Soup; Do Wrong Shoe; Solitary Moon; Living Without You.