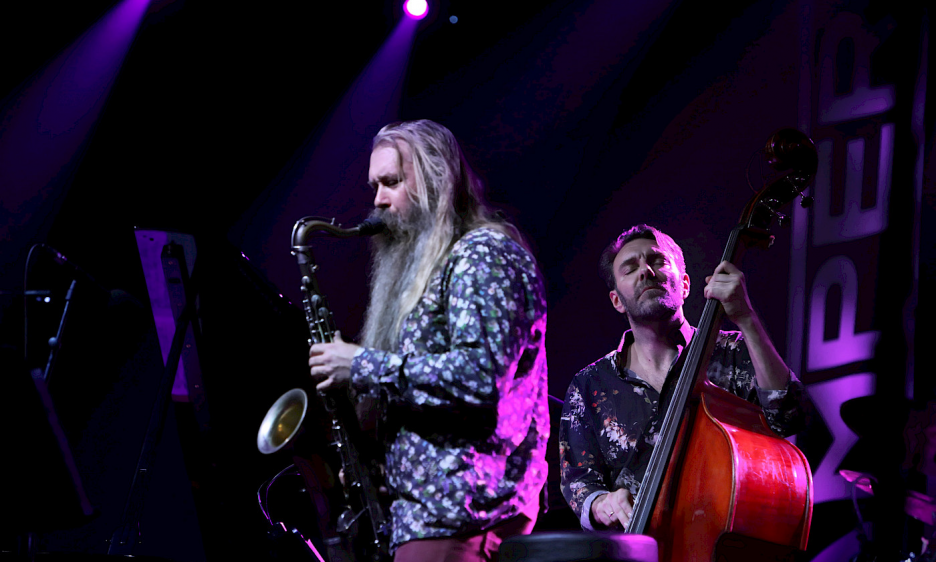 In Finland, as winter begins and the clocks change, the city of Tampere, a couple hours north of Helsinki, hosts its International Jazz Happening over a long weekend. The world comes to Tampere, and Finnish jazz gets to showcase its place and connections to the world. It's a tried and tested formula; this was the 37th edition.

Proceedings began in the main hall of the Old Customs House on Friday night by celebrating Finnish jazz, with the presentation of the Yrjö Award, Finnish jazz's highest accolade, this year to drummer Jussi Lehtonen. His quartet launched the festival programme with impeccable, driving post-bop, a blistering modal workout and then, showing their range with an affecting lilting ballad, "Lullaby."

The main programme continued with the restless spirit of veteran French bassist Henri Texier and his latest project, Sand Quintet, playing a set of originals drawn from across his near 50-year playing career. An old favourite, the North African-flavoured theme of "Les Là-Bas," launched racing swing and dynamic soloing. On "Sand Women," the front line of Sebastien Texier and Vincent Lê Quang unfurled a chanting motific theme over the leader's pulsing bass and Gautier Garrigue's skittering drums. "Pale Green Man" was a throbbing rocky blues. Texier's energy and drive seemed to make this set burst with life.

Then, Norwegian saxophonist Trygve Seim cast a spell playing music from his 2018 ECM release Helsinki Songs. It was meditative music, with constantly shifting moods. A languid statement of a hymn-like theme, pianist Kristjan Randalu skittered around it, giving way to an urgent pulse that built to to an intense climax, driven by drummer Markku Ounaskari. "Sol's Song" was an affecting, country-tinged melody; a singing, melodic bass solo from Mats Eilertsen emphasized just how much each member of this band brought to Seim's music. The set glowed warmly in the memory throughout the weekend.

Josef Leimberg's band took the atmosphere into different territory, with heavy beats and broken, stuttering bass bringing the vibe of urban America, a platform for incendiary soloing from Leimberg and reeds-man Tracy Wannomae. The beats continued after hours as the action transferred to the stage in Klubi, another bar in the same building. Starting in the early hours, Ghost Note—the brain child of Snarky Puppy alumni, drummer Robert Searight and percussionist Nate Werth—delivered a blistering set. The pair seems to have taken Snarky Puppy's DNA and pumped it up, creating an explosive and wildly entertaining set.

It's hard to imagine a bigger contrast between the the tightly coiled funk grooves of that late Friday night show and the spontaneous sound of Net of Indra, Saturday's first band back in the main hall in the afternoon. A quartet assembled by Finnish drummer Olavi Louhivuori , it brought together greats of European and world jazz: Finnish sax man Juhani Aaltonen, Swedish bass legend Palle Danielsson and Norwegian trumpeter Eivind Lønning. Melodic scripts bound episodes of free, spiraling exchanges and intense scrabbling crescendos together. Lament-like themes were stretched over bubbling and tumbling accompaniment, a high-wire act effortlessly executed .

The Happening's programme was as stylistically wide-ranging as the membership of the ensembles was diverse. Kaja Draksler's Octet was up next, drawing its personnel from seven countries across Europe and blending voices, strings and reeds with the leader's piano and compositional invention. Draksler drew on classical, opera, free improvisation, traditional music and more to create settings for the poems of Robert Frost. Wordless vocals and atmospherics from strings coalesced around tone-poem lines; ghostly lyrics rose through the mix; and a burst of Händel erupted through the swirl of group improvisation. It was a remarkable set, creating an enchanted soundscape that lured the listener in. ¿Que Vola? followed with a rhythm-heavy set, as a battery of Cuban drummers were pitted against dark, intense horns led by French trombonist Fidel Fourneyron.

Hamid Drake and Yuko Oshima delighted the early evening crowd with a conversational, interactive téte à téte, drum kit to drum kit, before Denys Baptiste and his quartet provided another high point of the festival. They offered a tribute to John Coltrane, drawing on the spirit of his later work for an incandescent set playing selections from Late Trane (Edition, 2017). Baptiste's soloing reached howling, ecstatic heights whilst remaining utterly personal, as the band dropped into a bustling, funky groove on "Ascent," took a lilting, lyrical approach on "After the Rain" (with a little dose of reggae), and finished in a maelstrom of rhythm from drummer Rod Youngs on "Vigil." They received a rapturous reception.

Rymden, the trio of pianist Bugge Wesseltoft, bassist Dan Berglund and drummer Magnus Ostrom, is the marriage of the longstanding EST (Esbjorn Svensson Trio) rhythm section with musical adventurer Wesseltoft. It sounded completely natural. There were hypnotic patterns melded with rocky grooves, elegiac hymns with lyrical soloing, and snappy riffs with fierce, spiraling invention. A fitting climax to the day.

Like all good festivals there were many layers, offering a plethora of choices. The intimate surroundings of the nearby Telakka's bar hosted a packed programme of the finest Finnish bands that, on Saturday, included 3TM and Halme Prospekt, finishing with a roaring set from the energetic and punkish trio Mopo, given an extra boost by its fiery guest, reedsman Mikko Innanen. The Finnish theme continued well into the night back at Klubi, with saxophonist Timo Lassy and his band delivering a burning, straight-ahead set, backed by the Ricky Tick Big Band Brass.

The Art Ensemble of Chicago brought the curtain down on the Happening with a typically riotous set on Sunday. Tampere's 37th Jazz Happening was a triumph and a showcase for the many avenues that jazz musicians continue to explore.