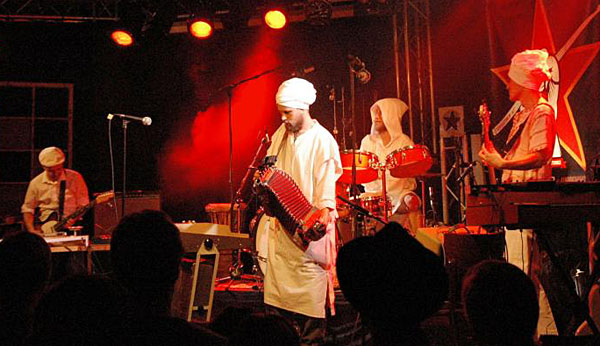 Winter may be approaching in Tampere, Finland, and the days getting shorter, but that only provides a better reason to stay inside and check out some of the country's most forward-thinking jazz artists at Tampere Jazz Happening. Now in its 29th year, TJH is part of a trifecta of Tampere music festivals that also includes Tampere Biennale (and New Music event), and Tampere Vocal Music Festival, all managed, for the past six years, by Executive Director Minnakaisa Kuivalainen. Tampere may seem like an unlikely place for a small but world-class jazz festival that, for its 2010 edition, augments its predominantly Finnish roster with performances by bassist Dave Holland's Quintet, guitarist Marc Ribot, percussionist Hamid Drake and Norway's Jazzmob. But, as appears to be the case in so many European countries, there are clear advocates who look to fan the flames of a jazz tradition that's as likely to draw on its own culture for inspiration as it is the conventional American tradition.

With a strong Finnish line-up that ranges from up-and-comers like reed multi-instrumentalist Mikko Innanen and national jazz legends like saxophonist Juhani Aaltonen, to relatively new groups like Tampo, two shows on the last day stand out in particular: a performance by drummer Markku Ounaskari, pianist Samuli Mikkonen, and Norwegian trumpeter Per Jorgensen to celebrate the release of Kuára: Psalms and Folk Songs (ECM, 2010); and Sound & Fury, a tribute to the music of Edward Vesala, featuring alumni of the late drummer/composer's groupwith a group of Vesala alumni, including guitarist Jimi Sumen.

Tampere is, in relative terms, a small city, with a population of just over 200,000 and, as Kuivalainen described it, still essentially a one-street town, built around its main drag, Hameenkatu. Situated between two large lakes—with a small river running between them through the city center that, as far back as the late 1800s, provided electrical power to the region—it's a strange combination of old and new, though to date it's managed to avoid the proliferation of tall buildings that usually signal a city on an upward trajectory. Still, that's not to suggest that Tampere isn't a growing city, the third largest in Finland. It's a hotbed of theater, with a quick walk through town revealing a number of venues, including one that appears to have originally been some kind of manufacturing plant.

Manufacturing has, in fact, been one of Tampere's primary occupations, with textiles, paper and metal all representing strong commercial contributions to the country and its economy. Traveling through a large stone and brick gate that used to be closed to the public as it signaled the entrance to a large clothing plant, it's now a gateway to gentrified apartments, the Vapriikki Museum, and more. Despite being closed, clothing has represented such an important part of the city's history that an entire section of the museum is dedicated to shoes. There is also an exhibition highlighting some of the city's innovations, the most important being its invention of air cushioned vehicles in 1930, which led to the development of the hovercraft in later years.

The museum also shines a light on a more difficult time in the country's history, the civil war of 1918—where, on April 6, a massacre of over 2,000 civilians in Tampere stood as the war's single biggest casualty event—and also the location of its biggest battle, where over 30,000 soldiers of the opposing Red and White factions fought in a conflict that remains controversial to this day. 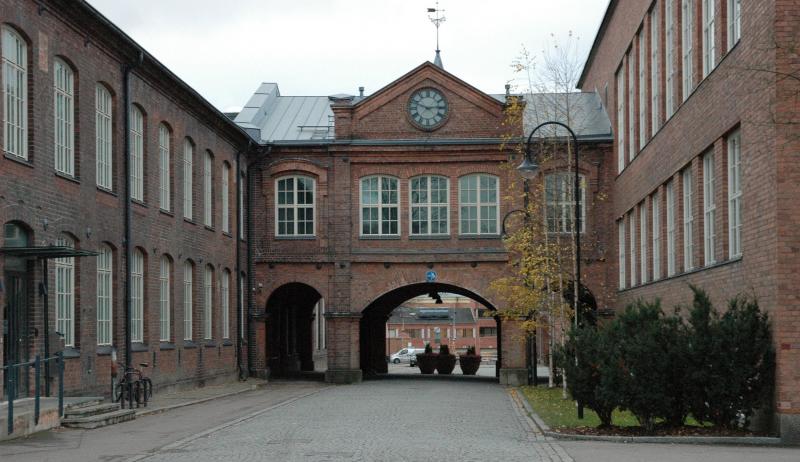 The last three decades have represented significant change and growth in the region, and can be seen in the very foundation of Tampere Jazz Happening which, like its sister festivals, is largely funded by the municipality. While local funding of arts events is by no means unprecedented, the idea of such extensive involvement is, and it drives the festival's primary purview of promoting Finnish artists to the world, through the eyes and ears of both guests from abroad and reporting journalists who, this year, come from North America, France, England, Estonia, Norway, Russia and elsewhere.

While it's a four-day festival, the first day was a relatively low-key affair, opening with a screening of Wonderland—a film collaboration between director Nicholas Humbert and video artist Martin Otter—at one of the festival's three venues, Klubi. Humbert is, perhaps, best known for his 1990 film, Step Across the Border, a documentary featuring guitarist/multi-instrumentalist Fred Frith and focusing on the New York avant-garde scene of the 1990s. Wonderland imagery was in stark black and white, with two square images side-by-side that sometimes flowed between one another, but more often remained distinct and separate, connected in only the most impressionistic of fashions.

Impressionism was, in fact, the driving concept behind the film, which also featured the music of Das Kapital, a group whose best-known member is guitarist Hasse Poulsen, also a member of French reed man Louis Sclavis' Napoli's Wall (ECM, 2003) project, seen in performance at the Canadian Festival International Musique Actuelle Victoriaville, in 2004. The music ranged from edgily grooved to abstractly free, though its connection with the imagery varied from successful to questionable. The success of the film was also, however, affected by the venue in which it was screened. A busy club, there was a lot of noise from people elsewhere in the club—eating, drinking and, most significantly, talking—that made it difficult to become completely absorbed in the film, so it's not entirely certain if the problem was with the film or the venue. 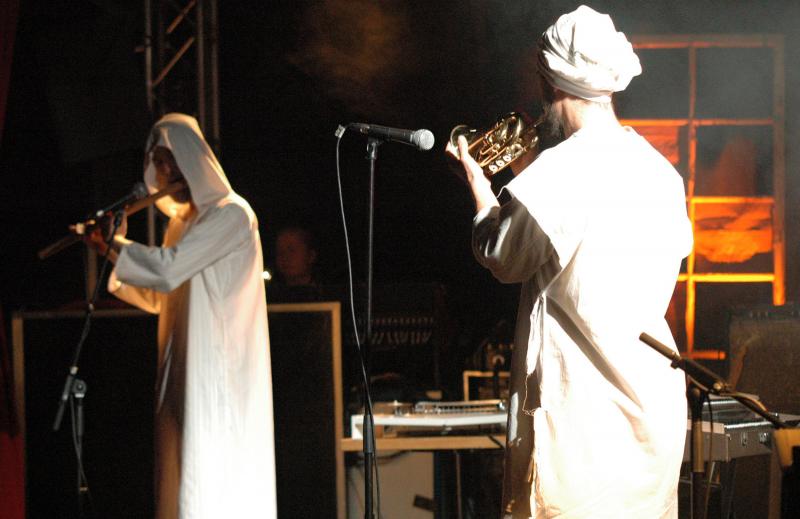 From left: Simo Laihonen and Kusti Vuorinen, of Tampo
After a short break, the festival's opening night featured two young groups from the area. Both were heavily based on groove, but the first act, Tampo, was more successful, marrying aspects of Finnish folk tradition with rock, reggae and even lounge grooves. Opening as a duo featuring accordionist Kust Vuorinen on pocket trumpet, and drummer Simo Laihonen on wooden flute—dressed in long white robes with hoods or turbans—it was, perhaps, an odd way to introduce its set, if only because it was so different from the rest of the music that followed. According to Laihonen, after the set, the group normally wears wooden masks sculpted by Vuorinen, rendered impossible by the decision to start with the horn/duo. Its serene, interactive and hauntingly beautiful ambience contrasted with the entry of the rest of the group.

With Vuorinen switching to accordion, the music turned to more hypnotic dance music, driven by Laihonen, percussionist Janne Moilanen and bassist Nuuta Vapaavuori's unshakable grooves. Electric guitarist Pentti Dassum, who also played keyboard and electronic percussion, channeled a mix of Jimi Sumen and Raoul Björkenheim ,with more than a hint of noise improve at times, creating curiously paradoxical music in its blending of various styles and musical parameters. With one album to date—the self-titled, 2009 Helmi Levyt debut—Tampo is a group that, at this point, possesses more promise than delivery, but time will tell if it has what it takes to evolve into a group with a more singular voice. 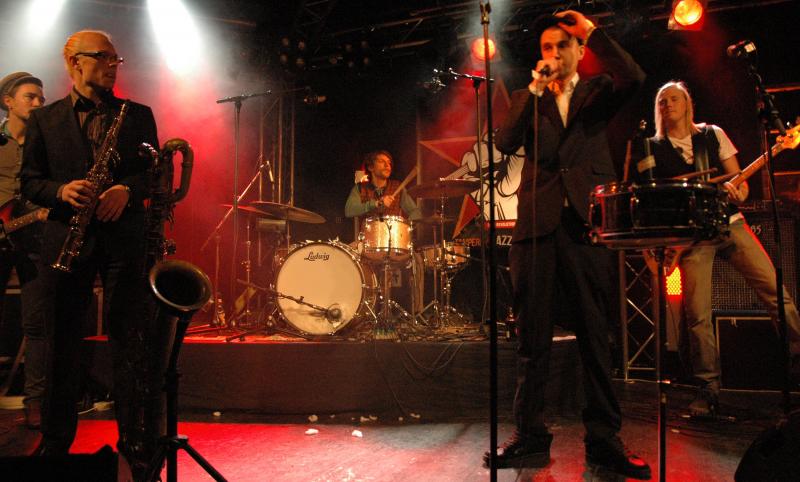 The Irrationals closed out the evening with a more energetic set that combined Balkan dance music with gangsta attitude, courtesy of singer Tyko Haapala. Led by saxophonist Antti Hynninen, who will be appearing on Sunday with the Ricky-Ticki Big Band, and driven hard by drummer J Salonen and bassist Pekka Rajamäki, the group's harder-edged rock textures came courtesy of guitarist Janne Kasurienen and keyboardist Totte Rautianeri, but it was Hynninen's muscular saxophone work that gave the group its distinction. The group went over well with the predominantly young, party crowd, but was ultimately more entertaining than compelling.

As a precursor of things to come, it was something of a curious opening night, but with the second day packed with a combination of Finnish acts like Markus Holkko Quartet and André Sumelius Quartet at Telekka, and Jazzmob and American artists James Carter and John Medeski's Heaven on Earth at Pakkahuone, Tampere Jazz Happening is clearly about to kick into high gear.

Visit Tampo, The Irrationals and Tampere Jazz Happening on the web.