Cheryl Bentyne: Talk of the Town 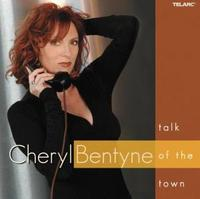 Before rounding out my list of the best jazz recordings of 2003 , I must make one addition. I had just received Cheryl Bentyne's Talk of the Town and was tempted to hold it over until 2004, and I am now most glad I did not. One quarter of the Manhattan Transfer, Ms. Bentyne established herself the Annie Ross of the group, possessing a breathtaking vocalese facility, a facility she uses most tastefully on her current recording.

Talk of the Town is characteristically a ballads album, and for this recording Ms. Bentyne is joined by the empathic and capable Kenny Barron, John Patitucci, and Lewis Nash, who collectively make up one hell of a rhythm section. Class acts all, these players form a supporting cast that any jazz vocalist should cherish.

The list of tried and true ballads would be ho-hum in the hands of lesser talent, but Ms. Bentyne puts a new shine on the silver. She and Patitucci open the festivities with a rapidly swinging "You'd Be So Nice To Come Home To." The opening duet chorus might be the most exciting thirty seconds on the record, except there is so much more to come. The languid "They Can?t Take That Away from Me" features a Chuck Mangione flugelhorn solo. "Little Butterfly" is a Jon Hendricks lyric applied to Monk?s "Pannonica," which Ms. Bentyne makes her very own.

Other notable cuts include a forest fire of Art Farmer's "Farmer's Market," a bebop instrumental to which Annie Ross supplied the vocalese. These are without question the most exciting jazz vocals of this year. The medley of the title cut and "Get Out of Town" begins at a plaintive rate and kicks into overdrive during transition between the two halves. Ms. Bentyne is perfect here. "Girl Talk" is given a Basie treatment with background vocals supplied by Take 6's Mark Kibble and Alvin Chea. The duet version of "The Meaning of the Blues" between Hannah and Bentyne illustrates both parties' exquisite taste in the genera.

You'd Be So Nice To Come Home To; They Can't Take That Away From Me; Little Butterfly; Very Thought Of You; Love Me Or Leave Me; Everything Happens To Me; Farmer's Market; Talk Of The Town / Get Out Of Town; Girl Talk; Meaning Of The Blues; It Might As Well Be Spring; These Foolish Things; Still Good Friends.