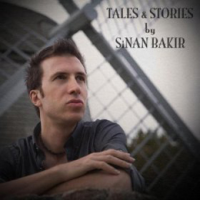 Guitarist Sinan Bakir's Tales & Stories are told by a talented quartet, which takes the guitarist's own tunes and weaves a dozen musical narratives of real quality.

Bakir—a Turkish musician who moved to the US after gaining an engineering degree—has developed an original style, combining his own Turkish upbringing with rock and jazz influences. Tales & Stories, his second album, hints at Chet Atkins, Kenny Burrell and even Steve Howe's jazz excursions in its flowing, melodic compositions. Whatever guitarists may have impacted on the young Bakir's development as a player, his own sound is fresh and distinctive.

Number one is Bakir's guitar sound: a tight, tense, tone that sounds like Bakir's favored right-hand position is just in front of the bridge, combined with a fluid left hand that moves readily between swift single-note runs and full, rich chords. Number two is the interaction between Bakir and pianist Warren Byrd. Byrd does his fair share of rhythm duties, comping sparingly to add depth to the bass and drums, but he's at his finest when he interacts with Bakir as a lead player. His sparkling runs and punchy solo on "Tales & Stories" and phrasing on the super-quick "The Messenger" form a delightful pairing with the guitar.

Bakir displays an admirable breadth of influences and styles in his writing. "Off The Hook"—with a memorable hook reminiscent of the Beatles' "Eleanor Rigby"—showcases the band's funkier side. "TV" is a bright and breezy country swing number. "Up" is a fast, bop-ish, tune with a fine Byrd solo. Bakir and Kneeland use harmonics to create a sensation of darting and swooping on "Kites." Bakir's Turkish influence is strongest on "Rising Tower Of Light," another tune that showcases the Bakir and Byrd pairing.

Bakir originally released Tales & Stories in 2012. It's worthy of reappraisal two years on—deserving of greater recognition, it's an album full of creative music with a genuinely original flavor.