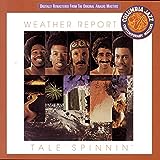 Weather Report followed up their imaginative Mysterious Traveller with this too-short but exciting offering in 1975. For the time being, the lineup had jelled around Zawinul, Shorter and Johnson, with Santana drummer Ndugu and percussionist Lima coming through the revolving door of rhythm. Inspired this time around by the spirits of dance and song, the group created an enticing selection of uplifting tunes that linger in the memory more than most of their output.

"Man in the Green Shirt" is a Carnaval samba gone electric, buoyed by Zawinul's airy keyboard lilts and Shorter's concisely beautiful soprano playing. The rhythm section achieves the elusive combination of propulsion and subtlety that has been so sorely lacking in subsequent fusion. The mood shifts on a dime on occasion, bringing new surprises and occasions for creativity. Shorter's "Lusitanos" illustrates his gift for creating a memorable tune with the smallest of tools, and the understated funk-wah of Johnson's bass adds a humorous undertone. The humor carries over into Zawinul's cartoony "Between the Thighs": totally unpredictable rhythmic and melodic shifts abound, and Shorter gets flat down and dirty on soprano. "Badia" draws from North and West African influences, achieving tension through a judicious use of space, then "Freezing Fire" moves back into funky bass and express-train power. "Five Short Stories" is indeed almost like a children's fairy tale in its lovely simplicity, drawing us into the unspoken narrative with a keen interest.

It's especially gratifying that Columbia is finally getting around to reissuing albums from this now-underappreciated phase in Weather Report's development. There are many worthy treasures to be found in the pre-Jaco archives, stepping stones to greatness that deserve dusting off once more. This one is an especially lustrous prize.