Tal Wilkenfeld Live At The Belly Up Tavern 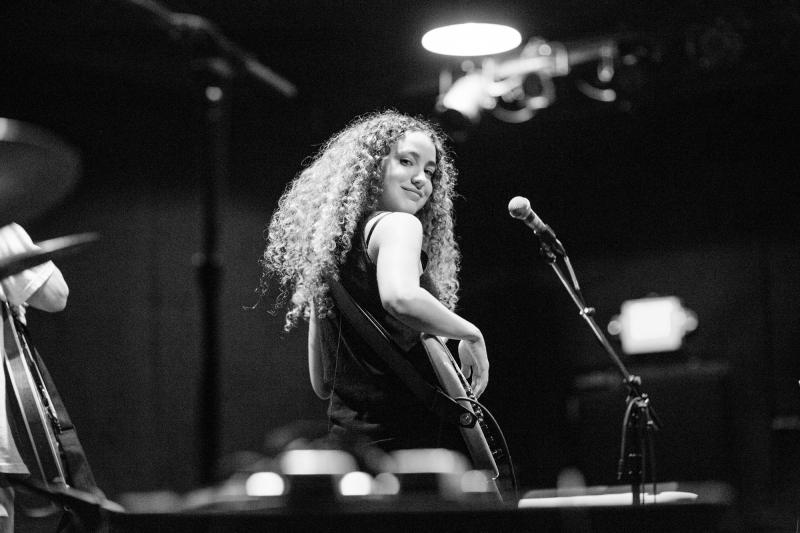 By JIM WORSLEY
November 21, 2017
Sign in to view read count
To be blessed with such an abundance of talent, vision, and spirit is a precious gift. We are all so very fortunate that Tal Wilkenfeld shares that appropriately bestowed gift with us every time she walks onto a stage or into a recording studio.

Wednesday night, November 15, 2017, the now 30 year old Australian graced the stage at The Belly Up Tavern in Solana Beach, CA. I did indeed feel most fortunate to take in her performance at this intimate and comfortable venue. Wilkenfeld's three-piece band was rounded out by drummer Tamir Barzilay and guitarist Owen Barry.

With a stylish and charismatic presence, Wilkenfeld is moving forward and blossoming into an artist of substance and purpose. She is already very much a veteran of the music scene.

The current and moving forward Wilkenfeld is the focus of this story. However, for anyone who has somehow missed it, let's take a moment to briefly run through her impressive resume over the past dozen years or so. An already staggeringly great bassist at age 18, she toured with The Allman Brothers Band. That led to guitar virtuoso Jeff Beck inviting her to play with him. Beck has referred to her as a musical genius. If you haven't already done so, treat yourself to the Jeff Beck Performing This Week Live At Ronnie Scott's video with Wilkenfeld, keyboardist Jason Rebello, and perhaps the most in demand drummer on earth, Vinnie Colaiuta. I believe I have watched it 562 times...but who's counting? She then went on to play with many of the giants of the industry. That impressive list includes Herbie Hancock, Chick Corea, Prince, and many more.

As if her rich and intuitive bass lines weren't enough, Wilkenfeld is now focusing on being a singer/songwriter. Only the title track "Corner Painter" and a song entitled "Under The Sun" were available to preview prior to this live show. I'm still trying to decide if I was more taken with her thoughtful and relatable lyrics, her true resonate singing voice, or the manner in which her phrasing embodies both components with a captivating force.

She engaged the crowd immediately opening with "Killing Me" and "Fistful of Glass." Both songs were perfect table setters for the one hour and forty minute set. After slowing things down for a moment, we then heard Wilkenfeld's full bodied and opulent opening strains of the aforementioned "Under The Sun." This song brilliantly fused Tal the bassist, and Tal the singer. This is one powerfully written tune about life and changes.

Wilkenfeld's sadness over the many musical icons that have left us over the past year was evident. She spoke specifically about Tom Petty, Gregg Allman, David Bowie, and Leonard Cohen. She told the appreciative Belly Up crowd that she feels very privileged to have had the opportunity to have conversations about songwriting with both Petty and Cohen.

A rousing version of Petty's "You Wreck Me" followed. It was played with the fervor and intensity that Petty had in mind when he wrote it. The three-piece ensemble shined brightly on this one.

Wilkenfeld chose wisely in selecting her band mates. They are both outstanding musicians who were more interested in the steak than the sizzle. Barzilay is a versatile drummer who seamlessly drove the changes and guided the ship. Barry showed his versatility as well. Most noticeably in playing the bass on a few songs whilst Wilkenfeld picked up a baritone acoustic guitar. They very much played as a unit, as a trio, not as Tal's backup band.

"Nobody Knows You when you're Down and Out" is an old blues tune written in 1923 by Jimmy Cox. Wilkenfeld's version was delivered as an ode to Cohen. It is Cohen that she misses so dearly. He was a genuine and unwavering mentor for Wilkenfeld. They became very close friends.

A bittersweet song about a one-way love affair called "Pieces Of Me" led into the intriguingly beautiful "Corner Painter." Then, soon it was time to take a bow.

Minutes later their encore started softly and then tore the house down with an amped up rendition of The Beatles "Happiness Is A Warm Gun." Oo-oo oh yeah!! Bang Bang, Shoot Shoot, Goodnight!

It's hard to believe that ten years have passed since Wilkenfeld released her first album as a leader. Her instrumental songwriting skills at that time were already expressive and well-crafted as guitarist Wayne Krantz, drummer Keith Carlock, pianist Geoffrey Keezer, and tenor saxophonist Seamus Blake joined her on Transformation. Little did we know then of the seamless and adventurous transformation to come a decade later.

Tal Wilkenfeld is an enlightened, intelligent, and immensely talented woman. With decades in front of her, she may very well place herself atop the highest perch amongst the most legendary music icons.

To borrow a line from her much beloved Leonard Cohen, "First she'll take Manhattan then she'll take Berlin."